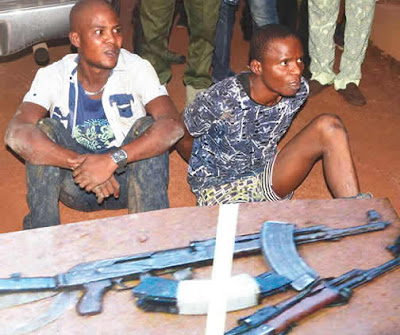 A member of a notorious robbery gang in Ogun state who shot and injured the former Divisional Police Officer (DPO) of Ogbere Division, Mr. Adeyinka Akingbade, was shot dead on Christmas Day during a gun duel with policemen in Ijebu – Ife, Ogun State.

The suspect, who fled to Delta State after shooting Adeyinka, was placed on the wanted list of the Ogun State Police Command.

The former DPO was shot and gravely injured by the gang during one of their robbery operations at Itele- Ijebu where policemen had gone to engage them in gun duel.

The injured officer is still recuperating at an undisclosed hospital in Ogun State.

The state police spokesman, Abimbola Oyeyemi, said in a statement that police got a tip – off that the suspect was sighted in a drinking joint in Ijebu – Ife but on getting to the location, he had left.

Abimbola added that further search led the police to his house where he was shot dead during gun duel between him and policemen.

“Luck, however, ran on him on Christmas day when police operatives received information that he was sighted in a beer parlour at Itawade area of Ijebu Ife.

“Upon the information, the policemen swiftly moved to the place, but before getting there, he had left the place.

“He was however traced to his in- law house where the police operatives caught up with him. Having realized that the game is up, he brought out a pistol and started firing at the policemen.

“The operatives were left with no other alternative than to fire back consequence upon which he was shot dead.

“Recovered from him are a locally made pistol, a matchet, assorted charms and a Toyota Highlander jeep with two different registration numbers,” he stated.

Politician Killed By Prostitute..Hon. Nasko Egei Poisoned To Death Inside Patience Jonathan’s Hotel
Yewande Adekoya’s Denial Of Arrest In Atlanta US A Blatant Lie By A Disgraced Actress – Insider