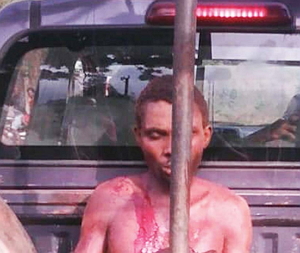 Ifeanyi Osita Oguejiofor, a native of Ezimuko Nsukwu in Abatete, Idemili North Local Government of Anambra State has allegedly killed his father, Osita, with a knife.

The 27-year-old suspect  injured his mother with the same knife.

The DPO in-charge of Ogidi Division, Mr. Mark Ijarafu, has confirmed the arrest of the suspect.

He noted that the suspect is not mentally unstable. Ijarafu noted that neighbours said he smokes Indian hemp

On the day he killed his father, the Okada rider demanded money from his father to buy a new motorcycle, since, according to him, the one he was using had become old.

The father reportedly told him he had money since he just bought a new engine to replace the old one in the motorcycle.

The source said the suspect did not like his father’s response. He went to the kitchen, took a knife, which he used to stab his father to death.

The eyewitness said the suspect also attacked his mother, who screamed for help.

He added: “The woman reportedly fell down. The suspect thought she had died and in a bid to escape punishment, he tried to commit suicide by stabbing himself in the chest.

“The woman shouted for help and this attracted passers-by and neighbours, who alerted a vigilance group and the Ogidi Divisional Police Officer, Mr. Ijarafu, who went to the scene with his Divisional Crime Officer, Mr. Fidelis Eyisi.”

The suspect confessed: “I did what my spirit told me to do.”

The body of the deceased man had been  transferred to Iyi-Enu Mission Hospital mortuary in Ogidi, while the woman had been hospitalised.