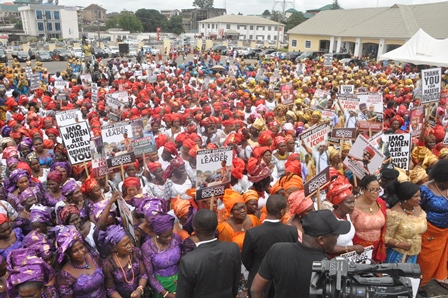 Motorists were grounded today in Imo State capital when thousands of women from across the state embarked on a solidarity march to celebrate the 55 birthday anniversary of the state governor, Rochas Okorocha.

Those who participated in the procession were market women, beneficiaries of the state Free Education programme and female professionals from various disciplines who lauded the Imo governor for initiating projects and policies that have impacted positively on socio-economic status of women in the state.

Continue Reading
You may also like...
Related Topics:march, Okorocha, solidarity