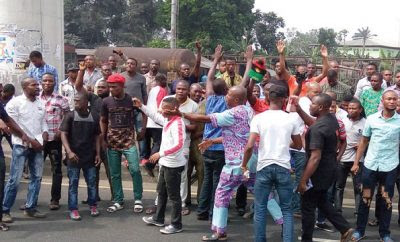 A coalition of Niger Delta agitators on Monday vowed to resist attempt to drag the Niger Delta region into the secession agitation by the Indigenous People of Biafra (IPOB), but said it was time the Nigerian government allow the Igbos to have a country of their own in the interest of the nation’s nascent democracy.

The group said Nigeria must not be allowed to go into another civil war, pointing out that the same antics currently being employed by the group was employed in 1966, when Igbos masterminded the Civil War and involved the South-South in Biafra map and major infrastructures were destroy in Niger Delta with over 15 million south south people killed.

In a statement signed by leaders of the group, the group said it has reliable information that some top businessmen and politicians from South East zone are the sponsors of IPOB.

They condemned calls by former President, Olusegun Obasanjo for the government to negotiate with the Nnamdi Kanu, saying it was surprised that the same man who ordered the destruction of Odi, in Bayelsa state would be talking about negotiation.

They said: “we hereby call on the Nigerian government, international community and the general public to monitor the activities IPOB and her sponsors carefully as we shall resist any attempt to drag the Niger Delta region into the ill advised secession activities of IPOB.

Any member of IPOB that causes mayhem in South East and want to hide in the Niger Delta region shall be severely dealt with. We are surprised that the South East Governors Forum could not call Nnamdi Kanu to order before things got worse as witnessed today.

All the serving Governors, Senators, House of Reps members, Ministers, Ambassadors from South East extraction should resign immediately and join Nnamdi Kanu to form Biafra government. Let peace reign in Nigeria. It was the agitation of Biafra that brought the last Civil war in Nigeria and we are not prepared for such. Reliable information at our disposal shows that some top businessmen and politicians from South East zone are the sponsors of IPOB.

“We totally condemn the call by former President Olusegun Obasanjo that the federal government should dialogue with Nnamdi Kanu. It is totally wrong that the man who destroyed Udi, Bayelsa state in Niger Delta can today talk about dialogue. During his tenure, Asari Dokubo and others were locked up for over one year without trial while he was busy siphoning Niger Delta money. Today he is talking about dialogue.

“We condemn the IPOB attack and destruction of properties in Oyibo in Rivers State. We have warned these people severally that Rivers State and the entire Niger Delta region is not and would not be part of Biafra. They rush to Rivers state to attack Hausa community in order to involve the Niger Delta territory in the ill advised secession agenda of IPOB.

“It will be recalled that the same antics was employed in 1966, when they criminally masterminded the Civil War and involved the South-South in Biafra map and major infrastructures were destroy in Niger Delta and over 15 million of our people were executed. We want to warn IPOB and its sponsors to steer clear from Niger Delta region, we shall resist them with everything within our reach.”