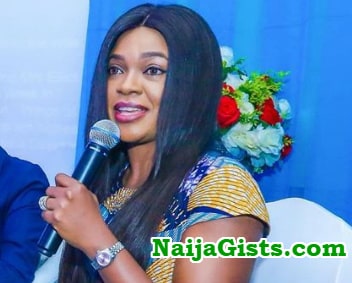 Top Nollywood filmmaker Omoni Oboli was one of the speakers at the Nestoil Corporate Headquarters to mark the International Women’s Day (IWD) with the theme #BalanceforBetter.

In her speech, the mother of three reveals how her mother’s strength prepared her for life, her incessant fight to end child marriage, life as a filmmaker in a male dominated industry and lots more.

Excerpts from her speech reads:

“I felt the snippet of my new movie will set the tone for my speech. We are talking about women, so we have to talk about girls because they grow up to be women. Every girl has the right to be educated. We can sit in our fancy home/offices and act oblivious to the knowledge of child marriage. Last year we went to Kano to shoot a documentary about Child brides.

How many of us here know my movie ‘Wife on strike’? Yes! It was about a group of women who went on a sex strike against the marriage of an underage girl. The movie was successful enough to start a conversation about underage marriage. But I felt we are not really talking about it in the right way, we do not know the child bride, and who is she? What are her dreams? What are her aspirations? Does she want to be anything other than someone’s wife?.

What does she go through? What are her experiences? So I felt maybe we need to show her to the world, “the child bride”. So my team and I did shot a documentary of real-life child brides and it was absolutely mind-blowing, a light bulb moment for us. We interviewed girls who had been married and divorced at the age of thirteen. It was so heartbreaking, the interviews we had with these child brides. We cannot run away from the fact that all over Africa that there are so many girls that get married off at a very young age who do not have an opportunity to get an education.

Without exception, every single girl that we interviewed said I want to or I wanted to go to school. So it is not because they do not want it but they are actually forced into these marriages. I wanted the world to see that for every time the husband has sex with her, he was raping her. So I just thought we should talk a little bit about the child bride and the fact that she is not allowed to get an education, because guess what if you ladies sitting here did not get an education we will not be sitting here today, in this lovely building which I think is the most beautiful building in Lagos.

Sometimes I shudder at the thought that if I was not given the opportunity at education I will not be where I am today. That brings me to the topic of strong women; may we know them, may we be them. My mother was a strong woman who had to take care of two young girls herself because she was divorced.

She was just a school teacher with a minimal salary, who sacrificed a lot just to give us basic amenities. I took this experience I had growing up and became my own woman, who would sacrifice a fancy holiday for my children’s education and growth,” she said.

Continuing, Oboli recalled what inspired her decision to become a Filmmaker : “I am going to use my experience as a filmmaker in a male-dominated industry when someone says movie director, what comes to mind is a man. Earlier on I wrote movies and gave to other directors to help produce but they never seemed to capture my vision correctly. One day I decided that if I want my movies to portray my vision, I would have to make a move and become a director but it was a scary thought.

I braced up and took a short course in digital film making at the New York Film Academy and thereafter I can direct my own movies. It took me four years after that to direct my own films, a long story, but it is a lot easier for men to get funding than women. Eventually, I got funding and directed my first movie, which was the first movie to get presidential screening. We were guest at our own premier, we were invited to the presidential villa and the President was surprised that the director of the movie was a woman.

There was a bit of push back about the president staying till the end of the movie, but he was engrossed and amazed that we had a long conversation afterward. At the end of the movie, he said what a great movie. I was excited that he did not say what a great movie for a woman, because we live in a world where when something is done by a woman it is good enough for a woman but when done by a man it is good period.

I am happy to say that women in the movie industry in Nigeria have stepped up and there are more female directors creating amazing work. In as much as I am a strong woman I still believe in chivalry from men, it does not stop me from being the best or make any less. I love being a woman, and in my next life. At the same time I want to be seen and heard not just to be a pretty face in the room, and when I am being heard I should be an impact.

So I am going to use my strongest voice not just for entertainment but also to educate people and start a positive movement. Another thing I want us to take away from this event is the fact that we need to celebrate ourselves as women, for the longest time women not supporting each other has been the narrative that has been pushed but we need to kill such.

Supporting and celebrating a fellow woman does not make you any less but makes you look better. So celebrate a woman today that is doing good, say “go girl” and see how it makes you a better person.

In every single industry or society, we need strong women and we need them to show for all of us and for the young girls too because they become women too and they are watching us. Thank you!”