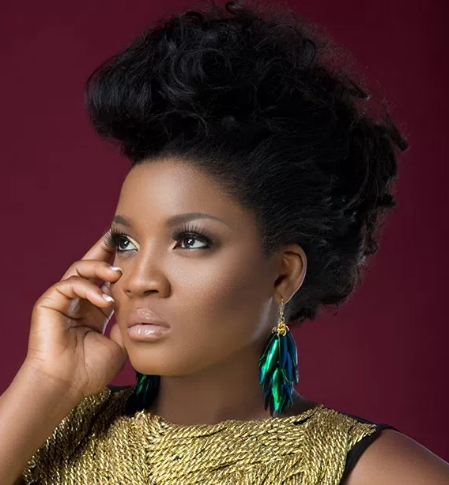 July 1st, 2017 – Omotola Jalade Ekeinde: I Don’t Watch My Own Movies Because I Criticise Myself A Lot

Nollywood actress Omotola Jalade is back on the big screen in full force.

Starring in a new film, Alter Ego that is bound to hit the cinemas soon, Omotola says she’s all for playing sex scenes convincingly and her husband knows it.

“Some of the sex scenes in the new film were downplayed because I’m married. But I won’t play the sex scenes if it wasn’t necessary. I know by starring in this movie that my fans would either hate me or love me forever.

While shooting the film, I knew I was doing something quite risky. There are several ways to shoot a sex scene tastefully. I’m all for playing a sex scene convincingly and my husband knows this.

Omotola also implied that she would not be bothered by any criticism that may come from shooting raunchy scenes.

“When I wasn’t even confident, I starred in a movie called ‘The Prostitute’, which was released 22 years ago. If I didn’t die then, is it now? I’m ready,” she said.

Expressing her displeasure watching her own sex scenes, the mother of four quipped: “I don’t watch myself on the screen. If I do, I’ll feel like burning inside. I might even start crying because I criticise myself a lot. Sometimes, I pity those sitting and watching most especially when I poorly do a sex scene. I would be like ‘what was that for?’ It can kill the whole movie when it’s poorly done.

For me, if a sex scene is not going to be well done, then why do it in the first place? If you must kiss, you should be able to kiss well. Make it professional.”

Omo Sexy, as the actress is fondly called, also justified her three-year break from the movie scene, assuring her fans that she is back for good.

“I got to that point when I felt like nothing was challenging me anymore and I began to feel like my standard was dropping. I went through that period and I knew I needed to stay away and wait for Nollywood to catch up with some of our ideas.

“So, I starred in movies that I thought could hold forth for me while I concentrate on other things like building my business. Coming back was hard for me because I was aiming for that movie that would challenge me. I got a lot of scripts and none of them filled that gap. I could have taken up some of them for the sake of money, but I have gone past that point.”

Continue Reading
You may also like...
Related Topics:movies, omotola jalade