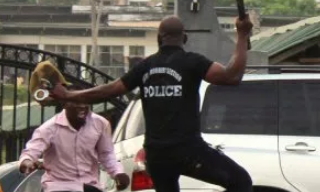 The Oyo State Joint Patrol Team, Operation Burst (OB), on Sunday killed of the six-man robbery gang that have been terrorising residents of Adegbayi area of the State for the past three weeks.

Governor Abiola Ajimobi SA on Security, Segun Abolarinwa said the OB team responded to a distress call from the residents while the robbers were operating at Emirate Hotel, Adegbayi area, Ibadan.

Abolarinwa said two members of the gang are in custody while the remaining one escaped with gun wounds.

“Early this morning (yesterday), the office of the Operation Burst, the joint patrol team set up by Governor Ajimobi to combat crime, got distressed calls from the residents of Adegbayi area, Ibadan.

The OB men swift to action immediately and engaged the robbers in cross fire while they were operating at Emirate, Hotel, Adegbayi.

“The engage of gun fire led to one dead instantly while two died in the hospital and one escaped with gunshot wounds. Two are in the custody of OB. We are optimistic that OB team and other Security agencies will not relax on their oars to make Oyo State safe for all and sundry.”