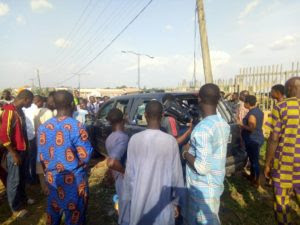 A teenage boy  identified Samadi Azeez, was today killed when an SUV crushed him as he was standing to cross the road in Osogbo, the capital city of Osun state.

The 15-year-old son of Osogbo NURTW deputy chairman Razak Azeez who went to Ayegbaju market to buy pepper was returning home when he was struck and killed.

According to an eyewitness, the deceased was struck by a grey coloured SUV after the driver heading to Lagos with his family lost control.

The vehicle with registration # Lagos JJJ 243 EF was set ablaze by an angry mob the moment the occupants of the vehicle were ferried away to safety. 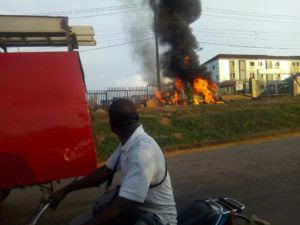 The deceased boy who was getting ready to write his JSCE Examination was killed at Ogo Oluwa area of Osogbo. 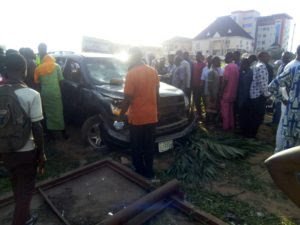 His father, the deputy Chairman of NURTW at Fakunle Motor Park  was devastated after sympathizers called him to retrieve the body of his son.

The corpse of Samadi Azeez had been deposited at Ladoke Akintola University Hospital mortuary.