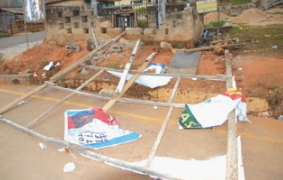 The billboard and posters located at Ayede Junction in the town was destroyed during a PDP rally held on Tuesday.

Eyewitnesses alleged that the billboard was destroyed by hoodlums led by a local government chairman who stormed the place in a Toyota Hummer bus.

The action sparked tension in the town as some APC members wanted to launch a counter-attack but were prevailed upon by their leaders.