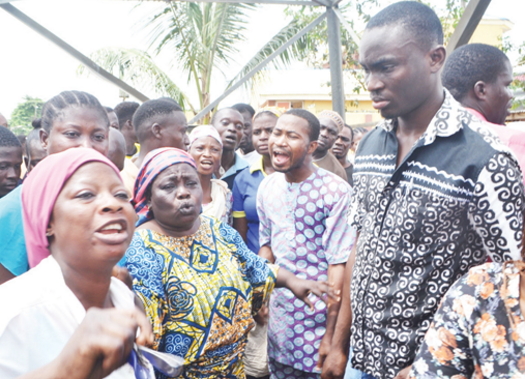 However, the suspected smugglers resisted the attempt which made the NCS officials to start shooting. In the process, stray bullets hit the three victims at different locations in the area. The incident, which occurred about 8a.m., was said to have caused panic among the residents of the area.

The motorcycle rider, Saheed Omotosho, was taking his motorcycle from the riders’ park when the stray bullet hit him in the chest.

The killings sparked a spontaneous protest by commercial bus drivers and motorcyclists before they were dispersed by a team of policemen from Alakuko police station. The incident also caused gridlock on both sides of the Lagos-Abeokuta Expressway as the protesters impeded free movement of vehicles.

The protesters also made bonfire at Moshalashi bus stop to register their grievance over the gruesome murder of their colleague. Our correspondent also learnt that the other two victims of the shooting spree by the Customs officials were an unidentified secondary school student and a pregnant woman.

A resident of the area, who identified himself simply as Ademola, said the commercial bus was coming from Sango-Ota in Ogun State with many bags of rice when the NCS officials started chasing it.