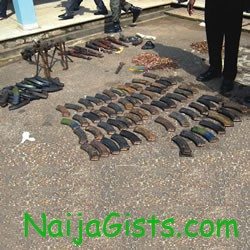 The Osun/Oyo command of the Nigeria Customs Service has intercepted a commercial bus conveying some ammunition to a yet to-be identified person within Ibadan, the Oyo State capital.

It was the vigilance of men of customs service led by the comptroller of Oyo/Osun, Mr. Mundu Mohammed, that led to the interception of the Liteace bus.

While speaking with newsmen, weekend, Mr. Mundu Mohammed, showed how 10 cartons of live cartridges were hidden among tubers of yams.

He said, the driver of the bus marked Kebbi XA 887 BRK in connivance with the owner of the illegal arms loaded the items from Iseyin and was to deliver it in Ibadan when his men stopped and searched him.

It was during the search that the cartons of live cartridges cleverly concealed below the tubers of yams were discovered.

During the parade of the suspect, Vanguard discovered apart from the tubers of yams, the bus also loaded bags of beans, wheat, yam flour, and corn.

The customs boss advised members of the public and the security outfits at the nation’s boarders to be more vigilant.

He stressed that just some few weeks ago, the command intercepted another vehicle loaded with marijuana.

While speaking with newsmen, the driver of the bus, Mr. Rasak Oluwole denied knowledge of the contents of the cartoons but said he was there when they were being loaded into the bus in Iseyin.

“ I was only paid to carry food items to Ibadan from Ajegunle market in Saki area. I only saw the boxes being taken into the bus, I do not know they contain cartridges. We have been calling the owner immediately I was arrested and he has promised to come”, he said.