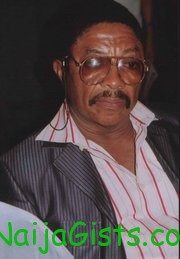 George Onah’s car was riddled with bullets but he survived unscathed the violent rampage of armed robbers attacking a Port-Harcourt bank just 40 days ago.

However, yesterday morning, George Onah, Vanguard’s Bureau Chief, Port-Harcourt, laid prostrate on his bed, his soul peacefully taken away by the unheralded messenger of death.

Onah had returned late on Saturday to the welcome embrace of his family and requested for a small portion of rice before retiring to bed. He did not wake up.

A former soldier, he joined Vanguard on his retirement from the Nigerian Army. On joining Vanguard he distinguished himself as a Defence Correspondent, but not without some brushes with the military authorities leading to his incarceration for almost one year in the nineties.

He was subsequently transferred to Port-Harcourt and rose to the position of Bureau Chief.

When on October 17, 2011 some robbers dressed in mobile police and military fatigue attacked a bank in Port-Harcourt, Onah perhaps called on his military background to dodge the bullets of the robbers.

Onah was attempting to drive into Ikwerre Road, when unknown to him the robbers who had surrounded a commercial bank, waiting in ambush for their targeted van carrying an unspecified amount of money.

The robbers apparently thought that Onah whose office was just nearby would block their getaway car, and so demobilised his car by pumping bullets on his car. While his car was demobilised, Onah laid flat in the car as the robbers went about their business.

Though he survived the violent visit of the robbers, he did not escape the quiet visit of the messenger from the great beyond yesterday morning.