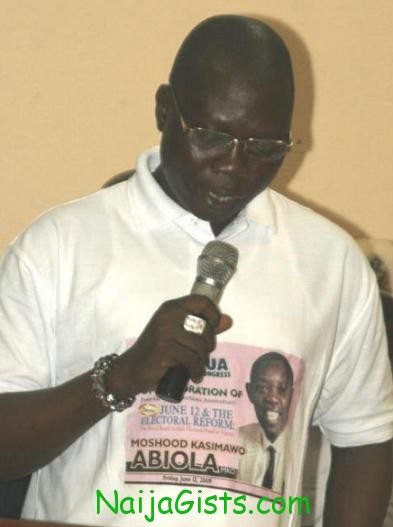 According to Vanguard, the National Coordinator of Odua Peoples’ Congress,OPC, Chief Gani Adams, has warned members of Boko Haram to stay away from the South-West, threatening to demystify the group should they perpetrate any violence in any part of Yorubaland.

Adams, who spoke in Ira, near Ofa, Kwara State, during the celebration of Oya festival, said: ”We have sent  a warning to them many times that they must not attack Yorubaland. We do not have anything to deny them. If they have any issue with the Federal Government, a Yoruba man is not in power now. So, I do not see them coming to Yorubaland.

”OPC has never gone to the Northern state to attack them. So, I do not see any reason, they do not have any record that our organisation has done any negative thing Kaduna, Jos or Bauchi State; why should they come and attack our region,” he added.

He said “We believe that there is a freedom of religion. We do not have religious crisis in our region.  You will see muslim and Christian and African religion believer, they intermarry, they relate and they have very good relationship.  Like this our festival, we have a lot of Christians participating.

“We do not have crisis of religion and we do not believe any group should come, attack or bomb any strategic place in Yorubaland.  If they do, definitely there will be a serious problem”.

Chief Adams however said “before we can active unity in Nigeria, there must be unity in the regions including the Yoruba land. If you want to build a house, you have to start from the home, from the region.  By the time we have unity in Yoruba land, it will serve a very good example for other regions because there would have been a precedent laid down by one region to other people to follow.”