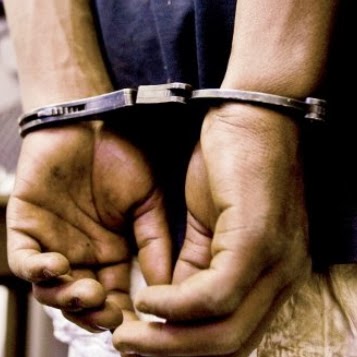 The police in Benin have arrested and paraded a 33-year paedophile, Justine Olise, who allegedly raped five boys aged between 10 and 15, blaming his girlfriend who left him and broke his heart for the act.

Olise was paraded alongside 59 other suspected criminals at the Edo Police Command Headquarters in Benin City.

He said he lured the victims into his room at 20, Evbodaghe street, Eyean in Benin City before carrying out the act.

“I don’t know what came over me. It all started when my girlfriend left me and broke my heart, so I wanted to stay away from all women,” Olise confessed.

Other suspects paraded were arrested in connection with kidnapping, armed robbery, rape, unlawful possession of firearms, cultism, stealing, attempted murder and forgery. A large cache of arms and ammunition was also recovered from the suspects.

The State Police Commissioner, Foluso Adebanjo, who paraded them, said most of the arms and ammunition were recovered from kidnappers and armed robbers.

He warned that the state would be tough for criminals, especially those who come from other states to operate in Edo, just as he warned local criminals against colluding with outsiders.

Adebanjo who was apparently angered by recent deaths arising from clashes between rival cult groups in the state, warned cultists to desist from killings or they would be dealt with severely and charged with murder.