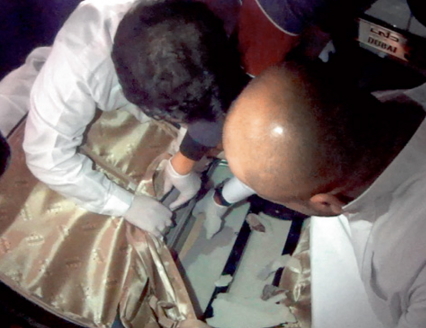 Woman From Pakistan Arrested For Giving 5.5Kg Of Heroine Drug To Nigerian Man In Dubai UAE

A Pakistani woman has been arrested for allegedly handing over 5.5kg of heroin to a Nigerian visitor in a park near Union metro station, a Dubai Criminal Court has said.

Dubai Police Anti-Narcotics Department said they received a tip off that an African visitor to the country identified as AH, 33, possessed and promoted drugs. Later, the department learnt that AH would receive drugs from a woman in the municipal park near Union metro station.

After completing necessary formalities, on November 3, policemen surveyed the area and observed AH coming to the park and walking suspiciously. Later, a woman in Pakistani dress arrived, carrying a plastic bag in her hand.

When she handed over the bag to the African man, police raided the place and arrested the two.

The bag contained 5.5kg of heroin.

Dubai Prosecution asked the court to impose stiff penalties against the two accused.

Their hearing will hold on March 17