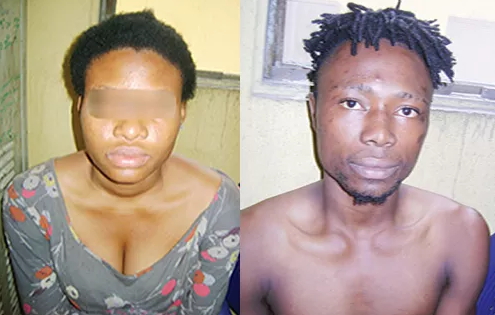 March 4, 2016 – Picture: 18-Year-Old Girl Who Ran Away From Home In Enugu, Impregnated By Lover In Lagos, Police Arrests Lover

A teenage girl who ran away from her family house in Enugu about 5 months ago has been found pregnant in Lagos.

18-year-old Chidinma was caught at Diamond bank in Festac Lagos on the 12th of February after four months of frantic search by her anxious parents.

She was 3 months pregnant by the time detectives from Festac Police Station picked her up at a branch of Diamond Bank in Amuwo Odofin.

Her boyfriend, 21-year-old Umar Idris who works as an hair stylist may be charged with rape and abduction.

Chidinma on the other hand said she would have gone back home, but she was waiting for her dad, who offended and made her to run away from home, to call her.

The dad never did. It was only her mom who bothered to call and often sends her money.

According to Chidinma, she said to Umar that she was 21. She added: “He asked me my age. I didn’t want to tell him my real age.

She lived with Idris for five months. It was within those months she discovered she was three months pregnant.

“I’m in love with Idris. Love is a strong feeling that binds people together.

I have strong feelings for Idris. He didn’t treat me bad. He took me to his house, fed and bought clothes for me. I don’t see my sleeping with him as paying him. I’m ready to marry him. I don’t think my parents will say no to our marriage.” – Chidinma told police