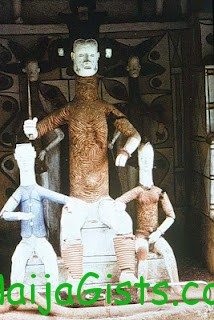 A 60-yr old pastor of a Winners Chapel in Etche LG Area of Rivers State, Nigeria, Pastor Onwudebe has been murdered after declaring God’s wrath on the Ala Eshi Community Deity. naijagists.com

Here is a detail story from Tide Newspaper

9 police officers serving at Okehi Police Division, have been detained in connection with the death of a pastor of Living Faith Church in Etche Local Government Area of Rivers State.

We gathered that the detained officers including the Divisional Crime Officer (DCO) of the division are currently helping the homicide unit of Rivers State Command Headquarters in Port Harcourt to unravel the circumstances surrounding the death of Assistant Pastor, Godwin Onwudebe, who allegedly died while under arrest.

The late Pastor Onwudebe who is 60 years old and of Living Faith Church, Ulakwo II branch was said to have incurred the wrath of the Umuala Ulakwo community after praying at the community square and declaring the community deity dead, and urged the people to follow the way of Christ for salvation.

According to the deceased’s son, Mr Wisdom Godwin, it was during a fasting and prayer programme of the church that my father got a revelation from God to go and pray at the community’s square, and after the prayer, he pasted a paper within the area, content of which passed judgement against the gods and goddesses of Ala Eshi (Local Deity).

Continuing, the 19-year old Wisdom and only son of the deceased, disclosed that after the prayer, the community said the pastor’s prayer had neutralised the powers of the community’s deity, and summoned the man of God. They, thereafter, set up a six man panel to try him, he said.

The pastor was later said to have been fined N60,000 for his disregard to the community, and subsequently reported to the police.

‘On 16th May, 2012, at about 2.00am, I heard my father shouting, the blood of Jesus, I thought he was praying but when I came out as the shouting persisted, I saw nine armed policemen who were dragging my father out, saying, you are under arrest”, the son narrated.

“My father was then tying wrapper, no slippers, no shirt, no phone when the policemen arrested him”, he said, adding that when later same morning, he went to Okehi Police Station in the company of another pastor of the church, they were asked to return around 4pm because the DPO was not in the office then.

He said when eventually, they met the DPO in the evening, they were asked to go to the Police Headquarters in Port Harcourt, where his father was said to have been taken to.

“It was there, we were told that my father died while he was being taken to Port Harcourt from Okehi Police Division”, said Wisdom.

The nine officers, who executed the arrest of late Pastor Onwudebe have been in detention sinceh May 17th while the result of an authopsy conducted on the late man of God is still being awaited.

When The Tide contacted the Police Public Relations Officer of the Rivers State Command, Ben Ugwuegbulam, he promised to get details of the incident and get back to The Tide, which did not come in spite of several calls and text messages placed on his phone line before filing this report.

The Tide further gathered from a reliable source that the Living Faith Church also known as Winners Church is determined to take legal action against the police and pursue the matter to logical conclusion.

These evil people must be brought to justice (The Tide).