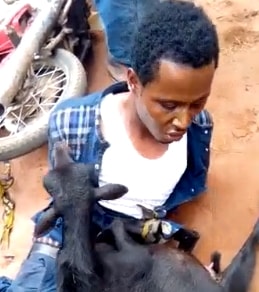 A young Pastor who identified himself as Chinedu Michael, an indigene of Oraifite comunity in Anambra state has made a bizarre confession.

Pastor Chinedu told Akukwa village vigilante group during investigation that he came to the town where the goat was stolen for an engagement and in the process stole the goat.

When asked what he wanted to do with the domestic animal, Pastor Chinedu said he wanted to use it for sacrifice.

The founder of Key of Life Ministries in Ozubulu town escaped jungle justice as he was handed over to police for investigation.

Check out his confession video below: