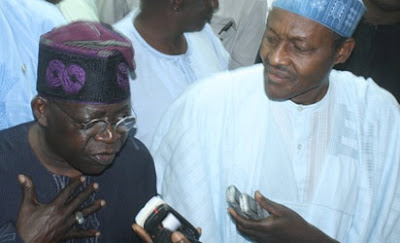 APC leader, Ashiwaju Bola Tinubu this afternoon cried out that the ruling party is planning to eliminate him.

In an official PR he released few hours ago, Tinubu alleged that PDP has hired trained snipers to assassinate him.

“ This part of the plot has two options. The first is to employ trained snipers to attack Tinubu or assassinate him out right. This plan is consistent with the warning made by former President Obasanjo in his now famous 2014 letter to President Jonathan. Those within the PDP favouring this approach argue that when Chief Bola Ige, a powerful politician, was murdered, heavens did not fall, although the former President, is a Yoruba man.

“The second option is more crafty. The PDP will seek to resuscitate the case of the murder of Funso Williams, a former Lagos State governorship candidate, by blaming Tinubu for the killing. They are already coaching inmates and others. They are offering them the promise of early release and money, if they will make statements implicating Tinubu in the Williams murder. The Presidency intends to rush through this process with the hope of putting Tinubu out of circulation by trapping him in a contrived criminal process, until the elections are over.”

“The PDP and Jonathan Presidency had recently tried to fracture the APC by offering Tinubu the position of the Vice President in an interim government, if he would agree to part company with the popular Buhari. Once Tinubu rebuffed the offer to participate in the interim scheme, the Presidency decided to change tactics. It would no longer try to entice Tinubu with sugar, but would now move to silence and, if necessary, neutralise him.”

“For the party that boasts it will rule Nigeria for 60 years, it has become an unexpected season of political desperation. The PDP is worried that, on March 28, they will discover that they have fallen 44 years short of their dynastic goal. By all accounts, this has caused them to consider very drastic plots and schemes.

”Nigerians are confronted with a ruling party willing to descend to the lowest to win elections. Perceived political enemies are being hunted. Trumped-up allegations are being manufactured daily from the government factory of lies to taint the leading figures in the APC.”