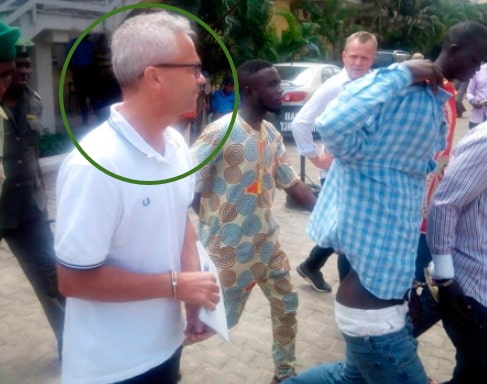 An High court in Igbosere Lagos on Monday heard that a Danish national, Peter Nielsen, once allegedly threatened to kill his wife, Zainab and their three-and-a-half-year-old daughter, Petra, while drunk or ‘mad.’

A prosecution witness, Daniel Simon Joel, told Justice Mobolanle Okikiolu-Ighile that the late Zainab was afraid her husband, who he called ‘Oga’, was “running mad.”

The court also heard that Nielsen made the threat in August 2017 and was arrested, but afterwards released by the police.

Nielsen, 53, is standing trial before the judge for allegedly killing Zainab – also known as Alizee – and their daughter, Petra, on April 5 at the couple’s Banana Island, Lagos home.

At the last hearing of the matter on June 13, the court authorised the Lagos State government to obtain Nielsen’s blood for DNA analysis.

At the beginning of proceedings yesterday, Joel, who identified himself as Nielsen’s former driver, testified as the prosecution’s first witness.

During his examination by Lagos State Attorney-General and Commissioner for Justice, Mr. Adeniji Kazeem, SAN, Joel narrated how the incident occurred.

He said around 1am on an unspecified day in August 2017, the late Zainab woke him from sleep and asked for his help to get security officials.

“In August 2017, the wife of Mr. Nielsen came to the drivers’ lodge at Bella Vista Tower around 1am, banging on the door, calling me ‘Daniel! Daniel! Daniel!” She said I should call the security guards, that Mr. Peter was running mad at her. That he wanted to kill her.

“I opened the door, I saw Mrs Zainab standing with Petal. She said I should call security and the people around that he was running mad.

“She said I should look at her face. She showed me her face that Oga wanted to kill her. Then I called security; they responded that they received a call earlier. Then we all went to the house. We saw Mr Peter at the house.

“Madam Zainab was telling us that Mr Peter wanted to kill her so she did not want to stay with him anymore. That the marriage was over.”

According to him, the police soon arrived and arrested Nielsen, but he was released afterwards.

Joel said he was in Kaduna last April when he received phone calls that Zainab and Petra had been killed.

Under cross-examination by defence counsel Mr Olasupo Shasore, a former Lagos State Attorney-General and Commissioner for Justice, the witness said Nielsen told him he had been drinking the night he allegedly threatened his wife.

Shasore: “Did he (Nielsen) say anything to you?”

Witness: “Mr Peter told me that he was drunk. When Mr Peter saw us heading to the house, he came to meet us. That was when he told me, ‘Daniel, I am drunk.’”

He said he saw the deceased smoke cigarettes, but that he never saw the defendant take cocaine.

Earlier, the defendant’s counsel brought two applications dated October 5, before the court, seeking approval to obtain medical samples from the prosecution to enable the defence carry out an independent DNA test and to grant them access to the crime scene, as it was shut.

Both applications were granted.

Justice Okikiolu-Ighile adjourned till October 9 for continuation of trial, while the defendant was remanded in prison custody.

Nielsen was arraigned by the Lagos State government on June 13 on a two-count charge of murder, contrary to Section 223 of the Criminal Law of Lagos State, 2015.

Adeniji told the judge that Nielsen murdered Zainab and Petra about 3:45am on April 5, at No. 4, Flat 17, Bella Vista Tower, Banana Island, Ikoyi.

According to Kazeem, the offences contravened Section 223 of the Criminal Law of Lagos State, 2015.

Nielsen, who has been on remand in prison custody since April 11, pleaded not guilty.

The defendant’s remand on April 11, was by a Yaba Chief Magistrates’ Court in Lagos following an application by the police.

The police alleged that the defendant was habitually violent to Zainab, a musician, and that a fight broke out between the couple in their flat about 3am, following which she and her daughter were killed.