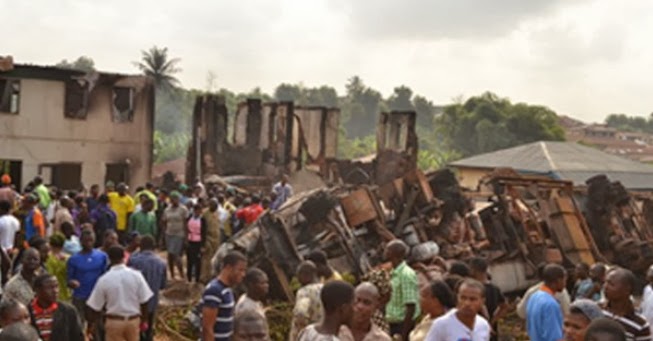 Tragedy struck in Aramoko Ekiti on Tuesday when a petrol tanker veered off a sloppy road and ran into some buildings.

4 commercial buildings, 2 cars, 10 motorcycles and other valuables that worth over ten million naira were destroyed in the fire.

As at 6:30am yesterday, the charred carcasses of the burnt vehicles, in various mangled shapes, were still on the scene. Sympathisers gathered there, wearing mournful looks.

Relations of the victims exclaiming from time to time, saying: “Olorun mi o, ofo semi” (oh my God, I am bereaved); “Iru iku wo ni eyi, mo daran” (what kind of death this, I am in trouble).

The dead include Pa Abiodun Ololade (78); Kokoro Owo (reportedly in his fifties) and a teenager said to be one Gani Foto’s step child.

An eyewitness said the propeller of the truck detached while it was descending a sloppy portion of the road from Ibadan-Ilesa end of the town.

He said: “There was nothing the driver could do. We followed it down to see how he would manage but the truck went where it wanted to go. It rolled off the road into the buildings and caught fire. A boy called Wande, who repairs laptops and handsets, escaped death because he was not in his shop. His shop and everything in it was destroyed.”

Mr. Agunbiade Kareem, who lived in one of the buildings and lost a brand new Toyota Corolla in the fire, said he was outside the building when he saw the truck falling off its path and exploding.

He said: “I was outside here when I saw the truck coming down and tumbling into the building. Thick smoke rose up, followed by an explosion that consumed the area. Apart from human loses, I lost a brand new Toyota Corolla, which someone proposed to buy from me at N1.4 million but I refused. I also lost two plasma TVs, one Sharp TV, six DSTV decoders and N513,000 cash, which I wanted to travel with today (yesterday).”

Mrs. Arowosafe Kubrat, who lost a Honda Accord car, said she returned from Osogbo around 5pm and parked her car in front of the house.

She said: “A few minutes later, I heard a loud explosion. I rushed outside and could not see my car. Inside it, I had N103,000, some tubers of yam, a leather box containing clothes, the particulars of my vehicle and those of another car.”

The tanker driver and another occupant of the truck are being detained at the Aramoko Divisional Police Station.

Five of the bodies were taken to the mortuary of the Ekiti State University Teaching Hospital (EKSUTH).

The Deputy Governor, Prof. Modupe Adelabu, visited the scene around 9am yesterday.

She urged the people to stop building houses close to the highway, explaining that trading or living in structures built on the Right of Way (ROW) and driving faulty vehicles portend danger for the people.

In an emotional voice, the deputy governor described the incident as “unfortunate”, urging the relatives of the dead to take succour in God.

She warned residents against taking the law into their hands, adding that measures would be taken to forestall a recurrence.

Mrs. Adelabu said speed breakers would be put on sloppy areas on the

Itawure-Ado-Ekiti stretch of the road as a temporary measure while the state dialogues with the Federal Government (the owner of the road) on how to provide a permanent solution to the challenges on the road.

The deputy governor, who later visited the Alara of Aramoko-Ekiti, Oba Olu Adegoke Adeyemi, to commiserate with him, urged drivers to always put their vehicles in order before driving them.

“If the trucks are well taken care of, most of these accidents would not occur,” she added.

Oba Adeyemi thanked the state government for its concern and urged the Federal Government to revisit the abandoned expressway located outside the town, which would offer an alternative route for motorists. She said the town’s road is accident prone because of its bends and slopes.