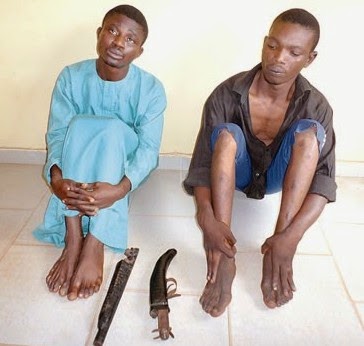 According to Crime Reports, the gang members, including Sodiq Asimiyu (21) a.k.a. Nokia, Lekan a.k.a Goddey, Ayo a.k.a. AY, Seun Ojo a.k.a. Sepe, Kassim and Sunday, among others, assembled at a hemp joint at Ojupa area, Oke-Bode, Abeokuta, on May 31, 2014, from where they took off to a robbery operation, using two Bajaj motorcycles.

They succeeded in their moves when they came across a man driving his Nissan X-terra jeep, whom they robbed and dispossessed of his vehicle in front of State Hospital, Ijaye, Abeokuta.

Unsatisfied with the previous day’s loot, the gang took off again with the X-Terra vehicle at about 5a.m. on Sunday, June 1 and moved to Elite area, Idi-Aba, Abeokuta, where they blocked a car driven by a Pastor at about 5.50a.m. while on his way to church with his wife and daughter.

A police source further informed Crime Reports that the man was dispossessed of N150,000, a Samsung Galaxy tablet and HTC phone belonging to his daughter, among other items.

Not satisfied, one of the armed robbers who eyed the cleric’s daughter with lust, ordered her to move away from her parents into the church, with the intention to have s*x with her…

On sensing this, the Reverend pleaded with them to spare his daughter since he had surrendered all they wanted to them. In a fit of anger over the pleading, one of the gang members pulled the trigger of his gun and shot the man in the mouth. Not yet done, another member went to their operational vehicle, brought out a bottle of beer, opened it and poured the content on the man of God where he fell. They left afterwards.

Nemesis however caught up with Sodiq when he was arrested on September 11, 2014 when he reportedly came back to Abeokuta for another operation. He was caught with a cut-to-size single barrel gun put in a bag. Also arrested was one Tunde Egunjobi in whose house Sodiq was nabbed.

Both are currently undergoing investigations at the Anti- Robbery section of the State CID, Eleweran, in Ogun State Police Command.