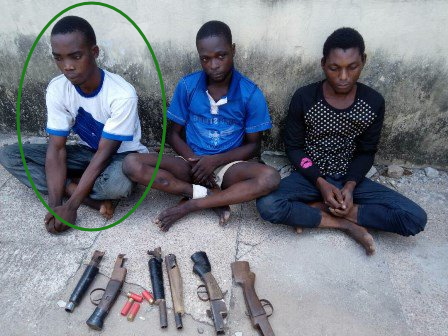 May 25, 2017 – Photo: Beninois Initiated Into Eiye Confraternity Confesses After Police Arrest Him & 2 Other Eiye Cultists For Murder At Seriki Village In Ogun State

3 suspected members of Eiye confraternity Wednesday blamed the Black Axe (Aye) group for the death of 12 of their members at Seriki Village in Ogun State.

A Beninnois, Moses Anthony 20, Kabiru Ajao 28 and Samson Adagu 25, were paraded by the spokesperson for the Assistant Inspector-General of Police (AIG) Zone II, Onikan, Dolapo Badmos, a Superintendent (SP).

According to Badmos, the suspects were responsible for numerous murders in the area including that of the leader of Aye, Lanre Welder.

She said three guns were recovered from the “killer squad.”

Badmos said: “The Zonal Intervention Squad received information that some cultists were always disturbing the peace of Seriki village. They stormed the community arrested three suspects, while others escaped. A search of their houses led to the discovery of ammunition and guns.

“The suspects confessed to have been involved in killings and counter killings. AIG Adamu Ibrahim has directed that investigations be thorough and suspects charge to court. They’ll be charged for murder and cultism.”

But the suspects, who admitted to have killed only Welder, said they did it to retaliate the murder of their members including a 400level Animal and Health Studies student at the Federal University of Agriculture, Abeokuta, Olakunle Adekunle alias Carlous said to be their leader.

They claimed that two traction al rulers were sponsoring the cult wars, alleging that one of the monarchs hired Aye members to rid his community of Eiye boys.

Callous was stoned to death by suspected members of Aye. His head was said to have been smashed.

Although the fight between the rival cults groups have been on for many years, Adagu said things got worst with the death of leaders of both groups.

Ajao said: “I didn’t go with the gang on the day Lanre Welder was killed. He was killed this month but Callous was murdered last month. I don’t know why Callous was killed but the killers are working for a certain monarch.”

Adagu, an artisan said: “It was Aiye members that killed Carlous. When his friends on campus heard about his death, they came to Seriki village and joined forces with Eiye members there. They carried out a reprisal and shot Lanre Welder, a member of Aiye, to death. Aiye members are seriously waging war against Eiye members. They have killed more than 12 of our members.”

Anthony, a bricklayer, denied killing anyone, adding that Callous was his brother. He claimed he was in his house when policemen came and arrested him.

“I came to Nigeria in 2010 to work as a bricklayer. A friend initiated me into Eiye. I have never killed anyone. My brother, Callous was killed on the road by Aiye members. They ambushed him. Eight of his friends came from school to avenge his death. They killed Lanre Welder. All the guns belonged to Callous. He brought them from school.”