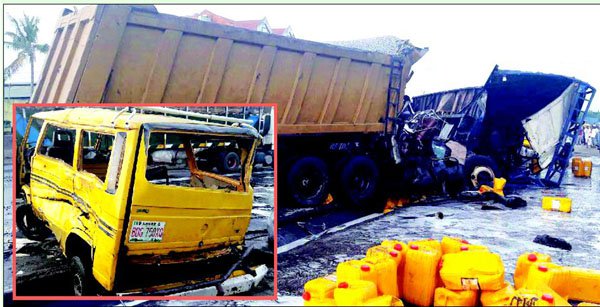 At least a driver died yesterday while another was in coma in a series of serious accidents that happened on the popular Oshodi-Apapa Expressway.

Another driver who was involved in the two crashes that happened between 4 and 5 am at Ibalex Bus Stop in Ilasamaja is currently in a coma.

The first accident reportedly happened when a gravel truck crashed into a truck carrying oil.

The truck driver and his motor boys were trapped for 30 minutes before police mobilised rescuers to the scene.

Here is what an eyewitness said about the unfortunate incidents

Another eyewitness who witnessed the second crash said:

An unconfirmed report revealed that a policeman in the bus suffered broken leg.

The bus involved in the tragic crash have been towed to a police station in the area while the damaged trailers and the trucks were still at the scene of the crash as at the time of this report.

Continue Reading
You may also like...
Related Topics:accident, fatal, ilasamaja