One of three suspected ritualists who allegedly turned eight people into goats in Ilorin Kwara state has been killed.

According to an eyewitness who identified himself as Tunde, the deceased identified as Kunle Poly and two accomplices went into Abayawo Oko village in Ilorin and kidnapped 8 people.

Tunde said villagers saw the suspects while abducting their victims. However luck ran out on them when two of their car tyres burst on Temidire Street. 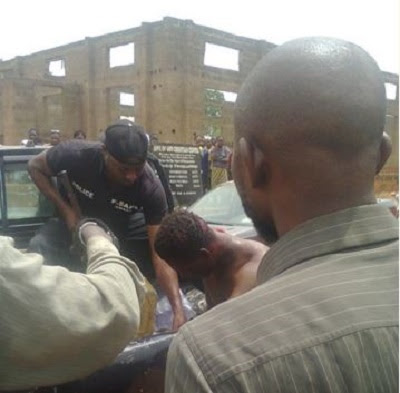 Two of them escaped while Kunle Poly was caught as he was about escaping.

To the shock of the villagers, their victims had turned into goats as they were about rescuing them.

They descended on Kunle Poly, placed tyres on his head and burn him alive.

Police rushed Kunle Poly to a nearby private hospital where he was rejected.

He was later rushed to the University of Ilorin Teaching Hospital where he was confirmed dead.

Kwara State Police commissioner Samuel Okaula said he doesn’t believe on the allegations because he was not around to witness the abduction.

He however said it is practically impossible to turn human beings into goat.

“As far as I am concerned, it is not practically possible for human beings to turn to goats. “The allegation was that he stole those goats. As a common criminal, somebody who is known for crime, the anger of the people overtook them and they started to deal with him.”

“Eight goats (supposed humans), were found in his car. We have information that the suspect had been a notorious criminal. The vehicle and the goats in it have been taken to the police station”

Human beings into goat… Hehehe our people will not kill us o.