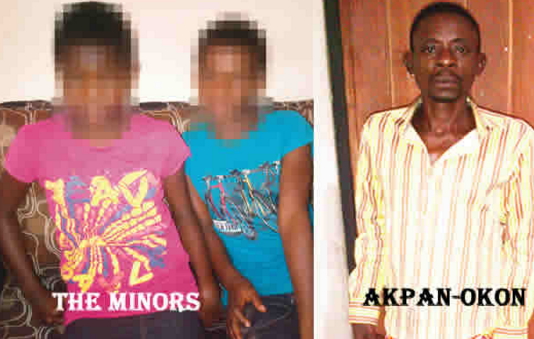 ………..Suspect Says Mother Of Girls Have Too Many Children

2 stolen kids that were rescued by the Cross River State Police Command on Thursday said they were made sex slaves by a herbalist, Emmanuel Akpan-Okon, who held them hostage for four years.

The kids, Esther Wisdom and Felicia Destiny, both aged 11, said in the four years that they were held hostage, the herbalist raped them almost every day.

42-year-old Akpan-Okon was arrested by the police following a tip-off that he specialised in the preparation of charms for armed robbers.

The state Commissioner of Police, Mr. Henry Fadairo, said the rescued kids were abducted from their parents separately from Onitsha, Anambra State, and Auchi, Edo State.

He said, “On November 16, 2015, we raided one Emmanuel Akpan’s home in Akamkpa, in the Akamkpa Local Government Area of Cross River State, based on a tip-off. We gathered he was into the preparation of charms for armed robbers and treatment of criminals with bullet wounds.

“During the raid, we saw two little girls in his house. One is Esther Wisdom and the other, Felicia Destiny. They are both 11 years. On enquiry, we found out that they were abducted four years ago. Wisdom was stolen from Onitsha while Destiny was stolen from Auchi.

“We are making efforts to see how we can locate their parents. The victims claimed that he had been having regular sex with them.”

Destiny said she was in primary four when she was abducted, adding that the herbalist had raped her many times.

She said, “I was in primary four when he took me away from my home. I remember that my mother lost her sister and when she was going for the burial, she told the man, who was a commercial motorcycle rider, to bring me to her village. That was how I found myself living with him. I used to tell him that I did not like sex, but he continued.”

Also, Wisdom said, “He has been having sex with us regularly. He gives us food to eat and promises that one day he will take us back to our mothers.”

Akpan-Okon, who is from Akwa Ibom State, said he abducted the girls because their mothers could not cater for them.

He said, “While staying in the same compound with Wisdom’s mother at Onitsha, I observed that she had problems bringing up her nine children. This girl, Wisdom, was always with me when I was staying in their compound. So, when I wanted to leave Onitsha, I took her with me without telling her mother.

“When I left Onitsha with her, I went to Auchi, and was riding a commercial motorcycle as a means of livelihood. Where I stayed in Auchi, Destiny was always coming to play with Esther. I also noticed that Destiny’s mother had many children. So, when I wanted to leave the town, I took her along.

“I had sex with them and I know it is bad in the sight of God. I have a girl child who is with the mother. I will not be happy if she is treated this way.”