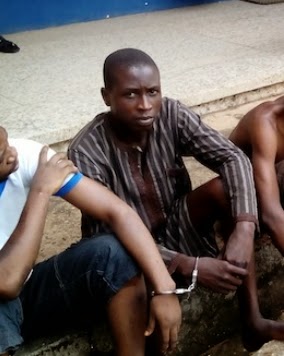 Pictured above is Ibrahim Adamu, a man recently accused of shaving his girlfriend’s pubic hair while she was sleeping in his room.

25-year-old Jumai Jasper alerted the police over suspicions that Adamu is planning to use her pubic hair for money ritual.

In his confessional statement to police, Adamu, a resident of Aduwawa village in Benin said he shaved the hair while sleeping with her and that the woman was his girlfriend.

“I shaved the pubic hair of the woman because I wanted to sleep with her, she is my girlfriend,” Adamu told police.

He however denied that he did it for ritual purposes, adding that, he threw away the hair away afterwards.

The Katsina indigene added that when his girlfriend woke up and discovered that he had shaved off her pubic hair, she demanded the hair but when he could not produce it, she raised alarm and the people around the place called the police ‎who arrested him immediately.