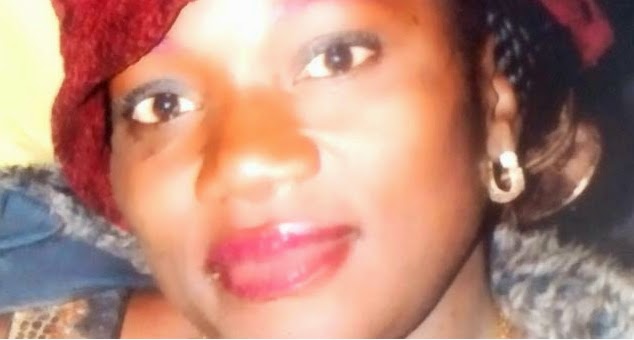 March 5, 2015 – Picture: Family Of Mentally Unstable Woman Burnt To Death After She Was Mistaken For A Suicide Bomber In Bauchi Laments

The discovery that the suspected female suicide bomber lynched by irate mob at the popular Muda Lawal market in Bauchi metropolis on Sunday, March 1, was, after all, not a ter­rorist, has left tears and sorrow in its wake.

It was a case of mistaken identity, it has been discovered, even as the victim now lies dead in the morgue after she was subjected to an agonizing death.

The fear that many innocent people can be­come victims of jungle justice is rife in a state like Bauchi where the fear of Boko Haram is the beginning of wisdom.

Now, questions are being asked about the circumstances that led to the death of the inno­cent woman erroneously tagged a Boko Haram insurgent at the Muda Lawa market.

Identified as Tabitha Haruna, 32, an indigene of Bogoro in Bauchi State, the victim Daily Sun learnt had been suffering from mental illness for close to a decade. It was discovered that she temporarily lost her mind once each year, after which she would be back to normal for the remaining days of the year. She was said to be undergoing psychiatric treatment.

It was learnt that 2014 was the worst year for Tabitha and her family, as her mental illness did not abate unlike in the previous years.

“But she hardly harmed anyone,” said Adam Kushi, Tabitha’s neighbour at Sakani, in Yelwa, in the Bauchi State capital. “She only issued threats. That’s all.”

Daily Sun has uncovered more details about the identity of the murdered Tabitha, who was set ablaze in the most barbaric and gruesome manner by a mob.

Many Nigerians are deeply concerned about the apparent lack of regard for human lives in the country. Although insecurity, especially the threat of insurgents, has persisted, the need to exercise caution to avoid shedding of innocent blood must not be jettisoned, many have argued.

When the reporter visited the deceased’s family house at Sakani, many sympathisers were at the place to pay their condolences.

Tabitha’s mother, Mrs. Rahab Haruna could not be consoled as she broke down while speaking with the reporter.

“My daughter has been wasted. I leave ev­erything to God. Let Him judge whosoever has a hand in her death,” she told Daily Sun.

Rehab’s husband, Haruna a civil servant with the Bauchi Sate Scholarship Board, died in May last year, leaving her with the challenge of dealing with Tabitha’s mental instability as well as the upkeep of her five other children.

“My mother works at the Bauchi State College of Arts and Science (BACAS), now School of Management. It was a very tough pe­riod for the family,” Alheri, Tabitha’s younger sister told Daily Sun.

Alheri, 26, said she had fond memories of playing with her elder sister who she described as very intelligent and sociable.

“We lived in the same room with my sister and we grew up together. We attended primary school together at Rariya before she went to Government Girls College, Tafawa Balewa where she finished her secondary school,” Alheri said.

According to her, the late Tabitha had shown interest in enterprise, adding that the deceased started a business shortly after completing her secondary education. The business flourished, said Alheri, adding that Tabitha took up the business of selling roasted chicken.

“She started with two chickens in a bowl and before we knew it, the business boomed and expanded. She started near Plaza and because she was doing fine, she soon got a place inside the Plaza,” Alheri said.

She revealed that something went wrong with her sister around 2005. “It started with problems in her business,” Alheri recalled. “Then one day she came to my mother, begging her that she should forgive her.

My mother was wondering why she came begging, telling her, ‘but you have been a wonderful and hardworking daughter who has been a pillar in the house.’ She started saying that some people wanted to kill her. We now took her to the Specialist Hospital, Bauchi.”

As Tabitha’s mental illness progressed, the family adjusted to the new life and challenges it threw at them. They accepted it as their fate and hoped that someday, she would be cured. But that dream never came to pass.

He said: “We used to take her to the hospital with the father and the family since 2007. But the madness was coming and going. It forced her to leave the house whenever she was unstable, but she always came back. The last time she left was on Saturday, February 28, only to hear that she was burnt down by a mob at Muda Lawa. We heard the report from the security people who came to the house.”

Alheri was at home on Sunday when some Security Service men came and asked of me and said that they saw my Corporative Identity Card which she was inside a bible that she carried on the day she was called and that was how they traced our house. They told us what happened,” Alheri said. security men came looking for her. “The State

“We are very sad about the way she was killed because she grew up around that area, which is Muda Lawal with her parents before the family moved to Muda Lawal market area.

“It is strange that she was lynched and before they carried out the action, nobody could identify her. She was actually a popular person because of the business she did, which usually took her to the market to buy birds to roast. It i s strange,” Danbale said

Alheri, who could not fight back the tears, reminisced on the happy and sad moments with Tabitha, saying that the family bore the brunt whenever Tabitah was ill.

“Whenever the illness started, she could be wild and destroyed things, or threw anything that comes her way.

“She would even abuse my mother and ev­eryone. It usually came once in a year and we understood and tried to manage it so that she would not suffer,” Alheri said. Once her head was clear, Tabitha became the beautiful, lively, industrious and deeply religious woman.

The quest to seek spiritual solution to her mental illness after all the drugs she took from the hospital treatment failed took her to the Living Faith Church, Yelwa Tudu Bauchi, after a friend, Ruth, had advised her to go there for healing. She attended the Believers Foundation School of the church.

“I remembered her vividly among the students. She was composed and asked intel­ligent questions. She was desirous of getting something that would change her life,” said one of the teachers of the Foundation School who pleaded anonymity.

“She also explained the challenge she was going through in the area of her health and asked for prayers. After seeing her picture now, I just remembered her,” he said.

Perhaps the mob misconstrued her defiance and refusal to be subjected to a search and con­cluded that she was a terrorist. The mob wasted no time in dispatching her to an untimely grave.

Alheri said what pained her the most was when the story reached her that seven tyres were placed on her sister by the mob before setting her ablaze.

“When I went to the mortuary and saw her dead body, I wept. I am still weeping.W e are wicked as a people. We rushed to kill an in­nocent person.

“I saw her burnt beyond recognition. Her head was off, her legs and hands were completely burnt off. Why? Since then I have been discouraging my mother not to go and see Tabitha’s corpse because she will never recover from the shock. We were told that she wore a hijab and when they stopped her, she refused to stop,” Tabitha said.

But the truth is, she was never a suicide bomber. The Bauchi State police command has disclosed that Tabitha was not a terrorist, according to their investigation.

The spokesman of the command, Haruna Mohammed, a deputy superintendent of police (DSP) explained that her gruesome killing was by mob action. He said: “What happened to her was unfortunate, as she was a victim of circum­stances. She was tagged by a mob which took the law into their hands.”

Mohammed said the police were making efforts to arrest anyone that was connected to the murder.

The Police Public Relations Officer (PPRO) said: “The police searched the scene and the entire area, and there was no explosive discov­ered. Before we reached there, they had burnt her. We saw the rampaging mob at the scene and quickly we had to restore normalcy. We warn members of the public against taking the law into their hands and anyone arrested would face the full wrath of the law. It is illegal to kill any suspect.

“After arresting any suspect, the legal thing to do is to hand them over to the police for in­vestigation and prosecution at the court of law.”

Tabith’s uncle, Dr. Ishaya Sumi said the fam­ily was happy that their daughter’s name was cleared of false accusation of being a suicide bomber.

Sumi said: “They found nothing on her, yet they killed her. We advised that the police should do something to stop this kind of kill ­ings; otherwise it will become a problem for the society.

“For us as a family, we have left everything in the hands of God and hope thatT abitha would rest in peace. We pray that God will expose those behind her death.”

Nigerian Woman Kept Husband’s Corpse At Home For 3 Years To Prevent Family From Hearing About His Death
Photos: Car Accident In Yaba Lagos, Multi Vehicle Collision Sent 6 To The Hospital