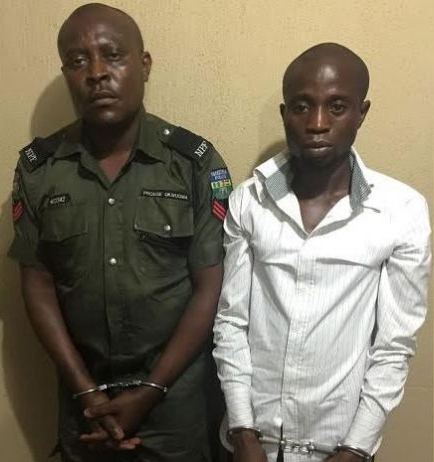 A Police officer and an employee of Access Bank have been arrested in connection to a foiled robbery case in Rumuolumeni area of Port Harcourt.

3 suspects were arrested last week Thursday while some members of the gang fled on sighting police operatives.

However, 2 AK 47 rifles belonging to serving policemen were recovered during the operation.

The discovery of the rifles led to the arrest of the above police officer, Sergeant Promise Ukwuoma and an Access Bank employee, Samuel Ndudiri pictured above.

The duo were arrested around 11:35am on Friday.

A police corporal, Gabriel Igwe and some members of the gang which arranged the foiled robbery are currently on the run.