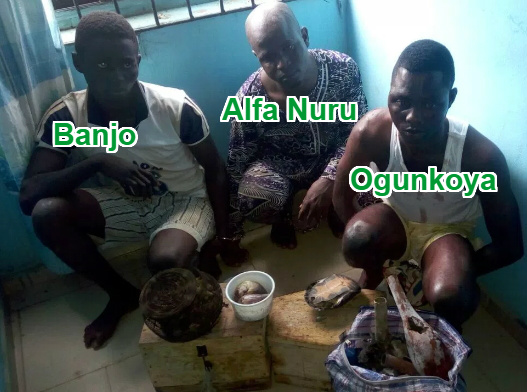 A young man who allegedly lured his girlfriend into the den of ritualists in Ijebu North LGA of Ogun state has been arrested.

The suspect identified as 19-year-old Tobi Ogunkoya allegedly lured his 16-year-old girlfriend, Olayinka into the house of a Native doctor identified as Tunde Banjo and an Islamic cleric, Alfa Nurudeen Adeniyi.

The victim was immediately murdered for money ritual. Her vital body parts including her breasts and tongue were removed by the suspected ritualists who later threw her body into Ogbere River in Ijebu East LGA of Ogun State.

Tobi Ogunkoya and his accomplices were immediately arrested after late Olayinka’ parents reported her missing at the police station.

Police detectives are currently working to retrieve the corpse.

Two human hearts and a life tortoise were also recovered from the suspected ritualists currently in police custody in Ijebu Igbo.