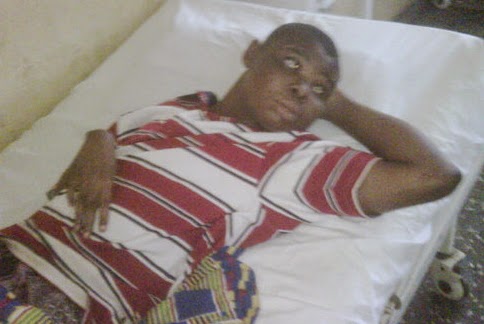 A 35-year-old man simply identified as Wahab Sa’adu in Alapa, Asa Local Government Area of Kwara State, has severed his genitals with a razor blade.

According to a family source, the victim, who is a fashion designer, rushed back home after he had chopped off his penis at a nearby bush in the village last Monday.

The source who craved anonymity said, “we were at home preparing for the day’s work when Sa’adu came in with part of his manhood in his hand with blood stain all over his trouser.

“His (Wahab) loud cry drew the attention of people in the neighbourhood to our house and everyone was shocked to see what had happened”.

The victim’s father was said to have fainted on sighting the severed part of his son’s manhood.

It was leant that the victim was first taken to a private clinic at Alapa for first aid treatment and later referred to a private hospital at Tanke, Ilorin, the state capital.

Narrating his ordeal on his hospital bed, Sa’adu attributed the mysterious act to “handiwork of witches”, who hypnotized him in the dream.

He said, “ prior to the incident, I had a dream in which three unidentified women appeared to me and ordered that I drink battery acid, which I did the following morning without the knowledge of anyone”.

“Three days after, I had another dream where the same women ordered me to wake up and cut off my penis. It was after cutting it off that I regained consciousness. So I rushed home for immediate remedy,” he narrated.

I Will Vote For GEJ Because Of Tribalism, Not Good Governance By Okafor Johnmary
Nollywood Actress Adunni Ade Says She’s Looking For Husband