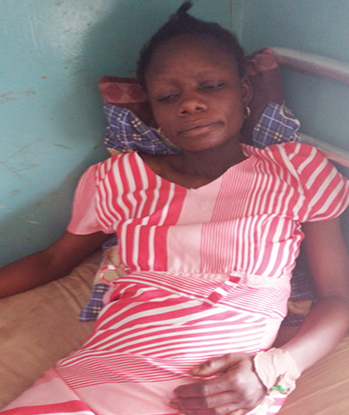 Mrs Risikat Bamidele, a 37-year-old housewife has lost her pregnancy after a Divisional Police Officer in charge of Kemta Idi-Aba Police Headquarters in Abeokuta, the Ogun State capital, allegedly brutalised her. The DPO, identified as CSP Samuel, was said to have assaulted the woman on Saturday night for “daring to make a phone call” in his presence.

The incident occurred barely two weeks after the Inspector- General of Police, Solomon Arase, warned officers and men of the state police command against unprovoked assault on innocent civilians. Speaking with our correspondent on her hospital bed at the State Hospital, Ijaiye, Abeokuta, Mrs Bamidele said she lost her nine-week-old pregnancy owing to the torture received from the DPO.

The victim, who is a nonteaching staff member of Catholic Comprehensive High School at Onikolobo, Abeokuta, disclosed that she was at the police station in respect of a matter involving her husband, Tunde Bamidele. Writhing in pain, Bamidele explained that she wanted to put a call across to her brother- in-law when the police chief descended on her with repeated slaps and jabs. According to her, the DPO later ordered her detention which was effected by a junior police officer.

She said: “When I got to the police station, my husband gave me his phone that I should call his brother. When I was calling, I just saw one man; I never knew he is the DPO. He said ‘you are very stupid, you are phoning after 8 (pm). You don’t know we don’t phone here after 8 (pm)?’ “I apologised that I wasn’t aware I shouldn’t call even when other officers were there and they didn’t stop me.

“He forcibly took my phone and called a police officer to arrest me. They harassed me and pushed me and my husband had to rush out shouting ‘she is pregnant, don’t push her.’ That was when the man started slapping and shouting at me.” Bamidele added that she suffered serious stomach pains all through the night following the assault.

She said the police officers on duty could not come to her aid but her husband gave her some money to buy sanitary pad to stop the blood flow from her private part. The victim added that on Monday she was rushed to the hospital where doctors confirmed that her nine weeks’ old pregnancy had been aborted. Also, the husband said he was detained at the police station for daring to request for some money owed him by a building contractor.

Bamidele claimed that the contractor, whose name he simply gave as Bolaji, owed him and other colleagues N894,000 for the past 19 months He said: “Bolaji and I were taken to the station where we were both detained initially. Before we were detained, the DPO said we should write statements but I said I wasn’t ready to write any statement.

“When it was 7pm, my wife called me because I am a diabetic and an ulcer patient and she had to come to the station. When she came, I gave her my phone to call my brother and what I heard from inside was ‘bastard, go inside’, and she was detained. My clothes were removed, and they poured water on me and gave an instruction that I should be smoked with tear gas.”

Bamidele also accused the DPO of collecting N20,000 before releasing him and his wife on bail. When contacted yesterday, the state Police Public Relations Officer (PPRO), Olumuyiwa Adejobi, said the matter had yet to be brought to the attention of the Commissioner of Police, Abdulmajid Ali. Adejobi, however, said the affected couple should write a letter of complaint to the police commissioner. He promised that they would get justice. The PPRO said the command would not condone any act of brutality against innocent civilians.