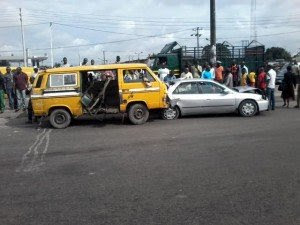 A bribe-seeking policeman died yesterday while struggling to arrest a danfo bus driver who refused to settle him.

According to some passengers in the bus, the unidentified officer stopped the driver near Fatgbems Filling station along Oshodi Apapa Expressway around 9am.

In a bid to avoid settling the policeman who was hanging on the bus, the driver sped off.

At a point, the policeman was trying to grab the steering wheel from him after which the bus driver slammed into a vehicle taking people to a funeral.

In the process, the ‘Oga Olopa’ fell and was crushed to death by a speeding trailer.

The danfo driver was said to have abandoned the bus and picked race.

Hear what a passenger in the bus, Rotimi Baki said:

The corpse of the deceased officer has been taken to Mainland Hospital Mortuary in Yaba.