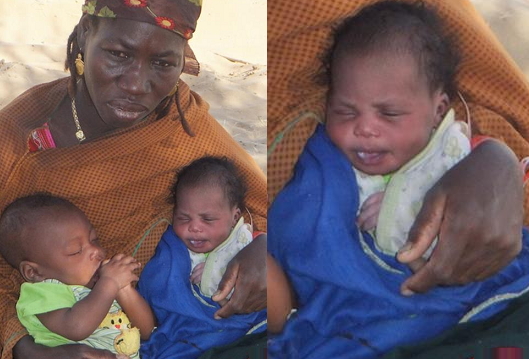 Pictured above is a kind-hearted woman holding a baby boy found lying in the pool of his mother’s blood after Boko Haram terrorists killed her.

This happened few weeks ago after Boko Haram invaded their village in Doro Baga area of Borno.

This woman said she picked up the boy after she saw him crying beside his lifeless mother.

“I live in Doro Baga, Nigeria. As I fled, I picked up this boy crying beside his dead mother. “At 6am we heard the sounds of guns, When they arrived for us an hour later, we started to run. They came after us and killed many people. I saw the boy and took him with me and my children, onto my husband’s small canoe out into Lake Chad. We stayed on a small island for three days, with nothing to eat, until hunger forced us to leave. I know the family of the child. I know the father but I do not know where they went or what happened,”.

This is heartbreaking!! What a wicked world!