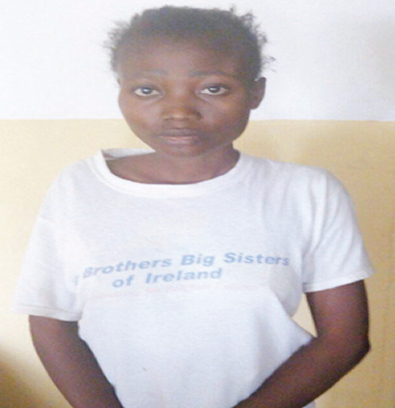 A 2-week-old baby boy stolen from his mother in Ogun State has been rescued by the police.

Ifeoluwa Yekini was arrested more than a month after she faked pregnancy and snatched a baby from his mother.

Ogun Police PRO Adejobi who confirmed the incident said the baby was stolen on October 31st and rescued on November 14.

The police spokesman added that the suspect had also deceived her husband into believing that she was pregnant.

Adejobi explained that having succeeded in stealing the baby, Yekini went into hiding at her parents’ village from where she called her husband and his relations on the phone, informing them that she had been delivered of a baby girl.

“The suspect, who had been monitoring the mother of the baby while pregnant, went under the pretense of felicitating with the mother in her house at the same village, requested to back the baby, which the mother obliged her. “She went further by requesting from the mother to take the baby out to shop for the little baby girl.

But at the market, the suspect decided to run away with the baby to an unknown place. “The mother of the baby, after several efforts to locate her with the baby, then reported the case to the police at the Police Divisional Headquarters in Ifo for search and necessary investigation.”