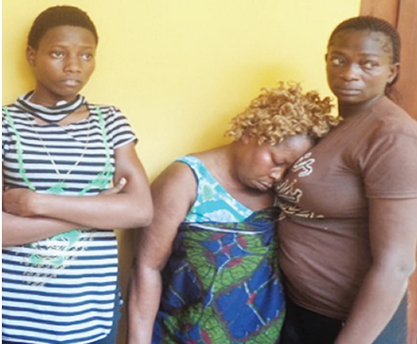 A grandma has been arrested in Abia State for selling her 19-year-old daughter’s baby for N150, 000. Police said that the woman, Eziaku Chidi, sold the baby with the consent of her daughter, Chinasa Chidi, the mother of the child.

“Their arrest followed a tip-off received by operatives. According to the report, Chinasa gave birth to a baby sometimes in January 2015.

The mother, Eziaku, with the collaboration of one Martha Ajuzieogu, who claimed to be a midwife, working with Lawato Hospital at Osisioma and one Amarachi, now at large, sold the child for N150, 000.” Chinasa said that her mother gave her N10, 000 as her share of the money.

She confessed to have used part of the N10, 000 to take care of some of her immediate needs, while the rest of the N10, 000 was used to pay for her apprenticeship. The police noted: “The self-acclaimed mid-wife, Ajuzieogu, who operates an unregistered maternity home in her residence, conspired with one Ngozi, a welfare officer, Amarachi, Chinasa and Eziaku to sell the baby shortly after delivery to a yet to be known buyer.

Eziaku and Martha claimed the baby died at the welfare home and the corpse thrown into a pit!” The police are working to track down the buyer of the innocent baby. The husband of Ajuzieogu, Mr. Stanley said he tried unsuccessfully to stop his wife from the illegal transactions.