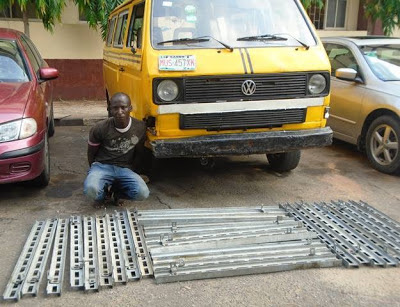 RRS officials have arrested a man, Ademola Ibrahim, who claimed to be a commercial bus driver, for illegally removing the railings of the Eko Bridge. Although the suspect said he was only assisting the ‘real thief,’ now at large, police said he was caught ‘in the act’.

Ibrahim was said to have conspired with one other suspect, identified simply as Kampo, to commit the crime on Sunday about 7pm but insisted that he was only called upon to assist in carrying goods which turned out to be stolen railings. It was learnt that the suspect was arrested while attempting to pack the railings into a waiting Volkswagen ‘Paragon’ bus with registration number MUS 457 XK while the said Kampo took to his heels upon sighting the RRS patrol vehicle.

The RRS operatives were said to be acting on reliable information that some miscreants were removing bridge railings. A police source said: “Yesterday (Sunday), one of our patrol vehicles, RRS 153, went on routine patrol and when they were going, they saw the suspect parking his Volkswagen ‘Paragon’ bus. They suspected something fishy and intercepted the man and interrogated him on his mission in the area. 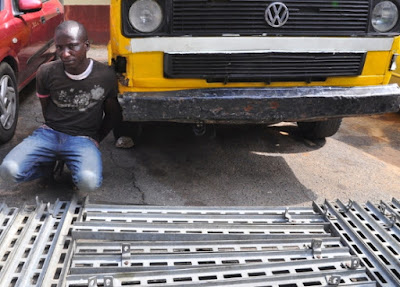