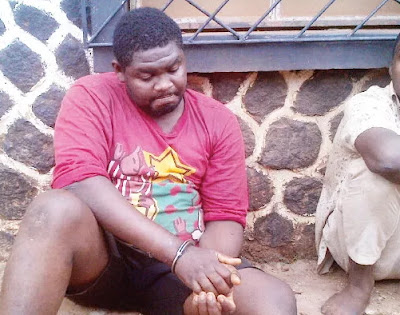 2 notorious armed robbers who specialise in using hammer to kill tricycle riders in Enugu and its environs have been arrested.

The suspects identified as Kennedy Ihunegbo and Nonso Azubuike escaped arrest at Keffi in Nasarawa after killing a tricycle rider in January 2016 and relocated to Enugu.

According to Enugu State police command, the suspects had killed 7 tricycle riders with an hammer.

Their Modes of Operation

“The modus operandi of the duo was to ask each tricycle operator conveying them to drop them at their purported building site, normally in a lonely place.

They would then request the operator to carry blocks for them in the tricycle, to another location. They would then hit the tricycle operator in the head with a very big hammer repeatedly as he bend to carry the block until he dies. “This was the method used in killing their seven victims on two dates in January and March at various times of the days. “In an instance, the head of victim was shattered. 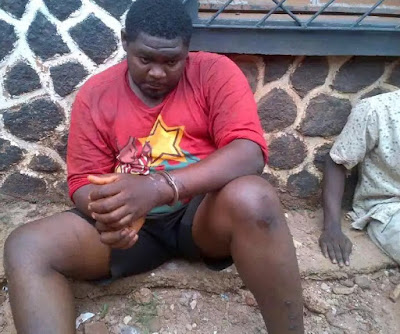 The two would then take away the victim’s tricycle and sell it. They forged a dealer’s receipt of DON Investment Limited, Nnewi, to convince prospective buyers to purchase the tricycles.”

Item recovered from the suspects at the time of their arrest include 7 stolen TVS tricycles, 1 Ford car with registration # AJ 656 EKJ, a big hammer used in killing their victims, a shovel used in digging shallow graves to bury victims.

The suspects told police they mainly rob non-Igbo speaking riders to avoid the operators understanding their conversations in Igbo language which might lead to their arrest.

One of the suspects, Kennedy Ihunegbo died on March 19 2016 shortly after he took ill in police detention.

His body has been taken to a mortuary in Enugu.