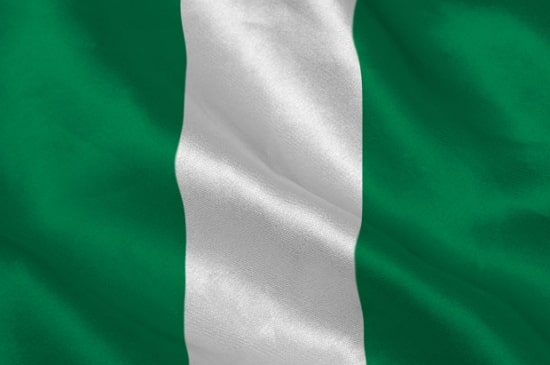 “PLEASE BEAR WITH US, YOU ARE IN A DIFFERENT ‘COUNTRY’ NOW”

When I graduated from Delta State University Abraka a little over ten years ago, I left without any delusions about the risks the average person living in that region faces. The violence I experienced as a student has left a kind of warning bell inside my head ever since. However, last week, I naively decided that after so long, things would have changed in the State and so I let down my guard.

Actually, nothing has changed. If anything, I think like the rest of Nigeria, the security situation in the State, especially in the Warri axis, is worse now. Since inception, the administration of the current government has been marred with cases of incessant armed robbery, kidnapping, cultism and all forms of social vises culminating into sleeplessness for ordinary people.

I was a victim, and from speaking with a number of indigenes after my experience, I gathered that a day hardly passes without news of a violent crime happening somewhere around the State.

Sadly, like the armed robbers who attacked us, some of the youths engaged in these heinous crimes are youngsters between the ages of 15 to 30 years, a generation on who’s shoulders the hope of the State should rest.

Depressingly too, it appears that crime is now seen as normal. Homes which are supposed to be the micro unit in society for incubating good kids has failed in the State. Religion, despite its proliferation, has also disappointed the State, and I ask, what is government doing to change this?

At about 6am on Thursday the 7th of November, I left Ibadan in company of an older friend and his family in a convoy of two cars, for Warri. We were supposed to make the trip on Wednesday, but due to a faulty fuel pump, the journey was delayed.

From the city of Ore in Ondo State, we noticed so many police check points so that they could have been more than 50 on the expressway. Even some parts of the road were not motorable, something that necessitated motorists to keep swapping lanes at different points of the journey. It was as if poles apart had a check point to the extent that police officers in one check point could actually shout orders to officers in the next.

After the delay caused by having to stop at every check we arrived Delta State at 6pm. I noticed the streets were more chaotic, rough and clustered than before. Then we got a call that the Sienna bus conveying the women and children had broken down in the town of Okpara Waterside, not too far from Warri. Upon reaching the expressway where the vehicle had broken down, we decided that the women and children should leave in our own car while we the men stayed behind. It was already few minutes 6:30pm and visibility level was by then rapidly dropping to zero.

At exactly 8:05pm (I took note of the time because I had just received a call from my uncle) after we had finished eating the food we ordered and were then waiting for the mechanic who had gone to get the pump from town, we suddenly saw masked men emerge from nearby bushes with guns, machete and sticks. It was so abrupt that within 5 minutes, they had robbed us at gun point, of all our valuables. My wallet first, then phone, laptop, power bank, the bag containing my cloths, ID cards, shoes, car key, external hard drive, documents and so on, all gone.

It was a very devastating blow for me particularly because it was not as if we did not know the security situation in the country, just that we took things for granted and didn’t generally appreciate how bad things have gotten.

We tried to make a report that night but could not. The following morning, we were at the Eku Police Station. First the lady in charge of registering crimes could not even speak or write good English. For every word we dictated to her while she took our statement, she asked us to spell. That left us wondering how she manages to register crimes. Then we were taken around the building to a nearby bush where the DPO was, seated in a wooden stool, dressed in mufti and fanning himself with a hand fan. He advised us to take the incident in good faith, or if unsatisfied, to go report either at Abraka or Warri.

We spent the whole of Friday from court to Police Station, and in the end we were asked to pay some money to get an affidavit and a police extract. 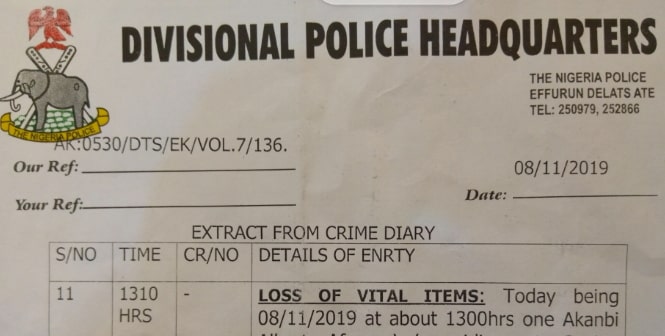 By the time we reached the venue of the programme for which we had travelled, guests were already leaving. In fact, our car had to wait with the other cars that had been stopped for Deputy Senate President Ovie Omo Agege whose convoy of over 20 cars took over 20 minutes to leave the premises. As I watched his motorcade leave, and seeing hungry faces milling around him and expectantly singing his praise, I asked myself what people like him are doing to solve the security situation in the State in particular and in Nigeria in general.

Delta State is rich in both human and material resources, why are the youths taking to crime? Back at the hotel, even at the Police Station, the court, the bank, there was hardly a place I went after the incident that I was not inundated with really depressing tales of people’s experiences.

Recently, we heard news of how President Buhari ordered a forensic audit of the Niger Delta Development Commission NDDC books from 2001 till date. Allegedly, “over three hundred contracts have been awarded with none executed and one hundred and twenty have been fully paid for. Even the headquarters of the commission is yet to be completed and it owes some phantom contractors millions of naira”. What sort of country are we building?

Throughout the Niger Delta, lands are degraded, rivers are polluted, places of worship have taken over and morality is dead and buried, youths are hostile, the aged are not catered for, kids are left to their whims and the innocents pay the price.

Like many Nigerians, especially those who have fallen victim of crime, I am asking; ‘what exactly is happening in this country?’ Why is it that most of our news from almost all sources, year in year out, are those of terrifying crimes, violence, or massive fraud? From incessant killings, kidnapping, stories of deviances to a satanic erosion of our values, pillaging of the economy, elementary social amenities that are left in shamble because corruption to financial mismanagement of untold magnitude, the story is the same. The painful part is that, it is those of us who go by our normal lives that are mostly victims rather than the people who bring these woes on us, and till date since independence, no one has ever been convincingly convicted or imprisoned for ruining or causing our nation harm, because of our much-cherished culture of impunity.

Sadly, these deviant behavior appears to be present in all of us, in all strata of the society. From “the civil servant who will bog you down in bureaucracy unless you pay a bribe to the nurse in a public clinic who will insist there are no available hospital beds until you part with some cash” we are all guilty.

Now the criminals who attacked us would sell our items off at giveaway just to get the fund for their next wrap of smoke and weeds, and the next day look for the next unlucky victim.

At the Police Stations we were educated on how criminals operate. It is really saddening. However, one thing I noticed is the dismissive manner with which the average Nigerian reacts when they hear “the police is on top of the situation” anytime a crime happens. The government and the police must do more to disabuse our minds and protect us.

An average Nigerian would be quick to claim being “a good and practicing Christian or Muslim, but watching him or her one would hardly find a real demonstration of the fruits” of religion.

On the journey back, the palpable feeling of sadness inside the car was so thick one could reach out and touch it or even slice through with a knife. We drove in silence, that sort of silence that said the whole story till we got close Sapele Round About.

There we were stopped at another Check Point. When we related our experience and showed our police extract, one of the officers shook his head, sighed and said to us: “I am sorry about what happened to you guys but please bear with us, you are in a different ‘country’ now”