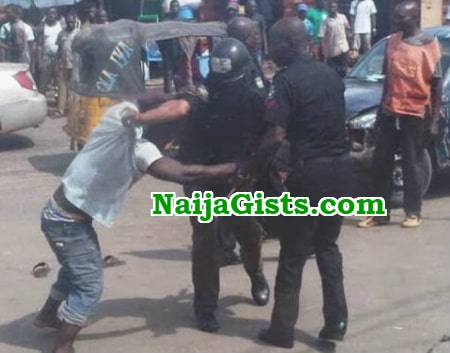 Some policemen in Lagos today allegedly killed a motorcyclist for refusing to give them N200 bribe.

According to eyewitnesses, the victim identified as Ademola Moshood was shot dead few blocks away from his house in the early hours of today Thursday the 28th of March 2019.

It was gathered that the policemen involved in the alleged murder were attached to Soloki Police Station, Surulere with two of their names given as AK, Patrick.

According to a witness, the policemen were on patrol when they sighted and stopped the deceased by Kilo Bus Stop in a bid to extort him.

A resident alleged that when Ademola refused to part with the usual N200 bribe on ground that he had closed business for the day and was home-bound, one of the cops, an Inspector, went close to him, placed his gun on the man’s head and shot him.

They were said to have fled the scene with the man’s motorcycle, abandoning his body on the ground after shooting him dead.

It was gathered that residents who witnessed the incident stormed the police station in Aguda in protest and sighted the culprits who hid behind a van.

They demanded justice, insisting that those involved be charged with murder.

Police spokesman Bala Elkana, a Deputy Superintendent (DSP) said the Commissioner Zubairu Muazu had ordered that the culprits be detained and tried.

“A petition was sent to the CP on the matter and he has ordered that those involved be detained and tried,” he said.