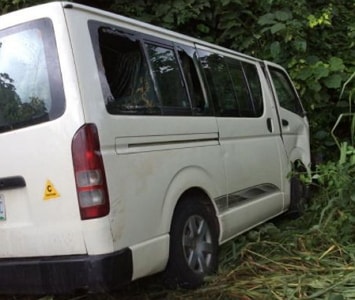 2 of the 16 passengers on board of a commercial bus that was hijacked by some suspected kidnappers in Rivers State two days ago are dead.

Their lifeless bodies were found yesterday after police recovered the bus.

8 other passengers were rescued alive while six are missing.

This was revealed by Rivers State Police Command spokesman, Nnamdi Omoni on Friday.

The bus was on its way to Port Harcourt from Owerri,Imo state when armed hoodlums hijacked it at Elele-Omarelu in Ikwerre Local Government Area of Rivers State.

“The Police have rescued the kidnap victims and recovered the bus they were travelling in.

“ They were rescued at the early hours of today(yesterday). However dead bodies of two of the passengers were recovered, six are still with them, but eight of them were rescued alive.”

Salvadoran Mother & Daughter Deported During Appeal Of Asylum Case Flown Back Into US On Judge’s Order
The Unfolding Ambition Of Saraki, The Chameleon Of Nigeria’s Politics