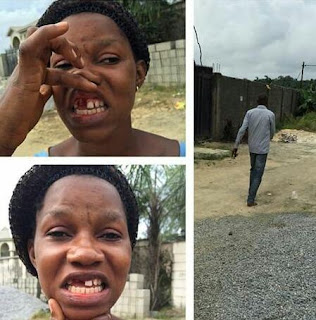 A 36-year-old man, Temitope Samuel, has been arrested and remanded in prison custody for allegedly assaulting his girlfriend, Temitope Adekunle, in Lagos State, western Nigeria.

Samuel allegedly invited Adekunle, who is a polytechnic student to his house at 20, Alhaji Yaya street, Ilasamaja, for sex romp which she obliged him.

We gathered that before he persuaded her to come, they agreed on a certain amount Samuel will give her to offset her expenses.

According to the police, after engaging Adekunle in marathon sex for several hours, he went out of the room under the false pretence to get the money he promised her.

We learnt that when Samuel later came back and Adekunle demanded for her money, he attacked and started beating her.
He forcefully dragged her out and locked his house and went away.

During the incident, Adekunle sustained serious injury on her body which is being treated.
Used and humiliated, Adekunle went to the police at Ijeshatedo division and reported what happened.
The police arrested Samuel and took him to the station for interrogation.

We also gathered that Adekunle is not a sex worker but only requested for money from Samuel to solve her financial challenges.
He was charged with assault under the Criminal Code. When Samuel was arraigned, he pleaded not guilty.

The presiding Magistrate, Mrs A. K. Shonubi granted him bail in the sum of N50,000 with one surety in like sum.

Samuel was remanded in prison custody at kirikiri pending when he will perfect his bail.
The matter was adjourned till 20 April, 2016.

Continue Reading
You may also like...
Related Topics:beats, girlfriend, man