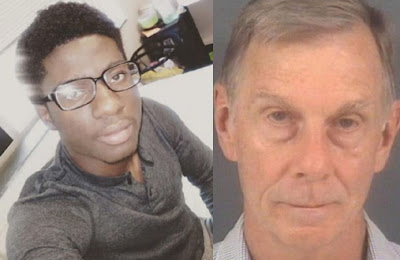 Adedayo Adeniyi, A Nigerian student based in North Carolina was singled out and kicked out of a Donald Trump rally in Fayetteville, NC last Wednesday.

Adedayo was tagged a protester because he was the only black person in the rally.

While being escorted out of the rally ground, 20-year-old Adedayo was attacked by a Trump alleged racist supporter Jason Wetzel who gave him a head spinning slap.

The 70-year-old Agbaya man previously arrested for voter fraud has opened up to NY news.

This is what Wetzel told New York Daily News

“I can’t believe I did that. It was me, but I’m not a hateful man. I just got caught up. When I saw the video all over the news of me doing that to that young man, I was just disgusted with myself, I want to apologize to this young man and maybe take him out to lunch or something.”

Of what use is lunch to a very educated boy from a well to do family. No one needs his lunch.

If Donald Trump supporters are slapping people like this while he is still campaigning, only God knows what they will do once he is elected.

Hatred or racism is like poison that eats people alive.