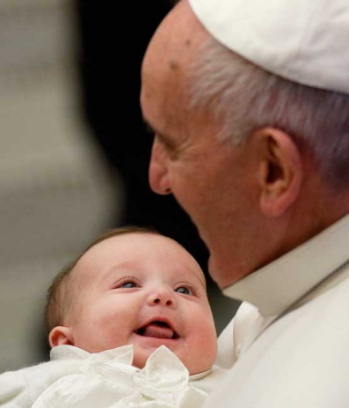 Roman Catholic Pope Francis encouraged women attending Mass at the Sistine Chapel on Sunday to breastfeed in public, telling them they could calm their crying babies by nursing them just as the Virgin Mary nursed the baby Jesus.

The comments, which were reported by Vatican Radio, came as the pontiff baptized 28 babies at the Vatican. When the infants began, one after the other, to cry the pope joked to their parents that Jesus’ first sermon was the sound of him wailing in the manger at Bethlehem.

According to a Vatican Radio correspondent, Philippa Hitchen:

As the sounds of crying grew louder, the pope joked that the concert had begun. The babies are crying, he said, because they are in an unfamiliar place, or because they had to get up early, or sometimes simply because they hear another child crying.

Jesus did just the same, Pope Francis said, adding that he liked to think of Our Lord’s first sermon as his crying in the stable.

And if your children are crying because they are hungry, the pope told the mothers present, then go ahead and feed them, just as Mary breast-fed Jesus.