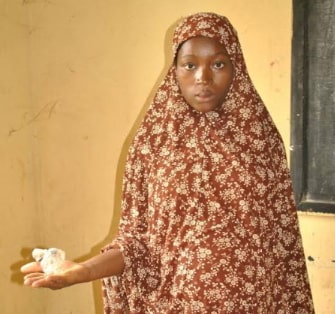 A pregnant woman has confessed that she killed her co-wife’s baby to teach her mother a lesson.

20-year-old Zulac Kabiru has confessed to killing her eight month old step daughter, Rukaiya Kabiru, to teach her co-wife how to respect ‘her superior’ by giving her

The heavily pregnant woman who was arrested by the police in Niger State for allegedly killing her eight month old step daughter by giving her local insecticide ‘otapiapia’ to drink at Danauta village in the Mariga Local Government Area of the state said that the second wife had the habit of insulting and assaulting her so she decided to poison her daughter.

It was gathered that the suspect and her fellow wife had not been in good terms for a long time; facts gathered also revealed that the first wife resented the marriage to the second wife.

Speaking to newsmen when she was paraded, she said,

“I warned my husband to desist from getting another wife in the family but he could not listen. The second wife was in the habit of insulting and assaulting me at all times and one day I decided to poison her eight month old daughter to death to increase her sorrow in the family, so that she will learn how to respect her superior in the family.

“Before my husband married her whom I kicked against, we have been living in peace but when she came she divide the family. My husband gave her more attention than myself and since then our family had been in shambles, “she explained.