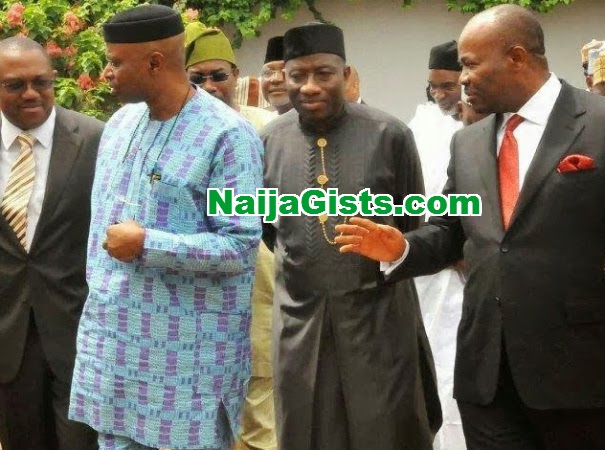 Jonathan Begs PDP govs to save him from impeding lose at the poll. Distribute N20 billion to govs. Governors from the PDP states and other key leaders of the party met with President Goodluck Jonathan yesterday night at the Villa. The meeting which extended to the wee hours of this morning, took place at the First Lady Conference Hall in the Villa.

All the PDP govs were in attendance exept the Gov of Bauch, Isa Yuguda and his counterpart from Jigawa state, Sule Lamido. They were not also represented at the meeting. The National Executive members of the party were led by its Chairman, Alh. Muazu who also moderated the meeting. Other noticeable key members at the meeting include Chief Tony Anenih and Chief Edwin Clark who arrived together in an FG marked SUV car around 11 pm.

There was only one agenda at the meeting; to use the opportunity created by the new poll date to canvas more supports for the failed administration of Mr. Jonathan. A reliable source at the meeting told me that some of the issues reviewed included the inglorious exist of key figures like Gov Amechi and the Kano state governor from the party. Drama ensued when Muazu tactically blamed the wife of Mr. President for beginning the problem which led to Amechi’s gradual exit from the party. It took the intervention of Edwin Clark to save the situation.

The chairman also ask Mr. Fani-Kayode and Oliseh Metu to tread softly in their propaganda which seems like giving General Buhari more popularity by the days. He asked the party to be more issued based in its campaign rather than attacking Buhari if the party must get good supports from the North. When the President finally stood up to talk, he thanked all the members present particularly the Governors and the NEC of the party. He assured them of his total support and enjoyed everybody to work together for the party to win the Presidency.

Quoting him, “The win at the poll is for all of us. We must work hard to save the party and all our contestants. It is true, the report out there calls for greater concern and this is why we must use the new window in the poll shift to talk to Nigerians, woo them and even beg them where necessary.” His speech was brief and straight to the agenda of the meeting. Chief Anenih also begged the members present to redouble their efforts in their different states so as to win the coming election, he said, “it is either will win or perish together.” Edwin Clark was more vociferous in his remark, the dark boggy man asked rhetorically why Mr. Jonathan seems not acceptable despite all his laudable achievement. It was silence, until the Gov Of Ekiti state interjected, Na conspiracy against us. Laughter pervaded a corner of the hall where some governors of the Northern state were.

Edwin Clark continued, “please my people I beg you this election is a must win for our president and all of us.” At about 3AM Doyin Okupe in company of Akin Osuntokun came in with a long list and immediately moved towards the president for a small conversations. He dropped the list in front of Mr. President and located an empty sit at one corner of the hall. The president pushed the list towards the direction of Gov Akpabio of Akwa Ibom State and left the meeting with the Vice president around 4.05 am.

At this point, Akpabio took over the meeting and he announced that Mr. President has approved the distribution of N20 billion among some state governors. He also announced that the following states (Kano, Lagos, Rivers and Kaduna) would take N2billion each to woo voters in this states. Another 2billion was also set aside to buy some political and public analysts to talk more about Mr. President and his achievement over the last 6 years.

Some TV stations such as AIT and Channels would do the Job. The meeting agreed to reduced negative adverts on Buhari, but Gov. Ayo Fayose of Ekiti and his counterpart from Ondo saw it differently. Then the meeting came to an end at about 6. 10 this morning.