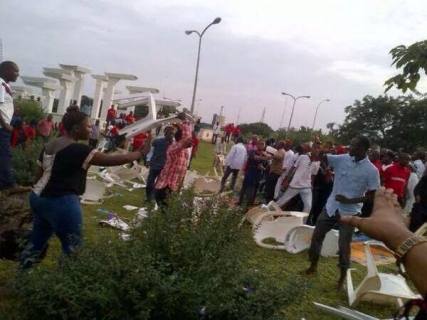 Following our march to meet with President Jonathan, during which he was represented by a delegation led by the Secretary to the Government, a speech was read on his behalf advising our movement #BringBackOurGirls, Abuja Family: “…that protests should be directed at the terrorists…”. 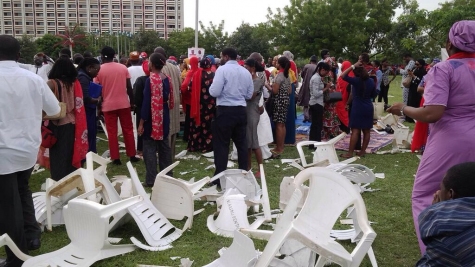 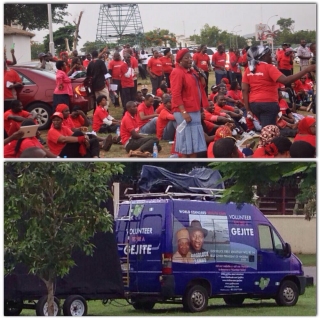 Last Monday May 26th , being the 27th day of our daily gathering at the Unity Fountain and the 42nd day since the abduction day of our girls, we observed a large contingent of a new group that arrived in over 30 Federal Government SURE P Buses with a message that aligned with what we had been told during our meeting with the Federal Government delegation.

Understanding fully the constitutional guarantee of every citizens’ right to their expression and to peaceful gathering, we continued with our own meeting in a new location, having lost our usual spot to the new group. Regrettably, we then witnessed patterns of escalating aggression toward our group by this new group.

In our bid at stemming any further aggravation, we wrote a Letter of Complaint dated 28th May to the Inspector General of Police and the FCT Commissioner of Police which was duly received by their respective offices. In our letter, attached to this Statement, we reminded the Nigerian Police that we have been a group, which has conducted itself with utmost civility in the course of our campaign for the abducted Chibok girls. We asked the Nigerian Police Force to be available to reprimand the aggressive group and remind them of the need to conduct themselves similarly and to desist from any form of confrontation to our group.

Unfortunately, what we feared would happen unfolded, and tragically with officers of the Nigerian Police Force looking on, thugs, hooligans, miscreants dressed in the red, yellow, and white t-shirts with the inscription: #ReleaseOurGirls Boko Haram” burst upon our group breaking chairs, and bottles on the heads of members of #BringBackOurGirls, Abuja, many of the women broke down. They snatched phones and handbags of ladies in our group and also attacked the local and international media correspondents, confiscating and breaking their cameras. The police, at a point, arrested two of the ringleaders, but before our very eyes, released them barely 10 minutes after.

By this Statement, we are calling the attention of the President, the Federal Government and the international community to the descent to anarchy against our group, which simply emerged as a women-led civil society group driven by a response to the plight of the abducted Chibok girls and their families.

We know that this is a violation of our fundamental right to peaceful assembly and freedom of association, but we remain resolute in standing with the Chibok girls. We invite every Nigerian with goodwill towards the abducted girls to our daily events. Tomorrow, we shall stand in solidarity with them through a National Symposium, which will be holding at Thisday Dome, with live broadcast on Channels TV. We shall return to the Unity Fountain on Friday, May 31, 2014 and will continue with our daily advocacy. We shall continue to demand that those with the responsibility to protect our lives and our welfare to BringBackOurGirls.