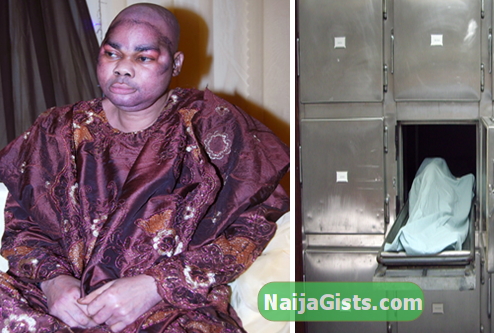 Prophet Ajanaku Died In His Sleep Of Drug Overdose: How Church Members Engaged In Prayer For His Resurrection

The founder and pastor in charge of the Christ Revival Church International located in Baruwa in Ayobo-Ipaja, Lagos, died in his sleep on Saturday August 17, 2013.

We learnt the controversial prophet died in his sleep on Saturday after a nurse administered sedatives to calm down his nerves after his situation got worse.

He reportedly didn’t wake up from his sleep.

His dead body was brought into his house in Lagos from his hometown (Gbogan) on Sunday evening.

According to sources, the elegant preacher reportedly fell ill about 8 weeks ago and after all medical methods to get him well proved abortive, he was taken to his home town for traditional treatment.

Throughout his downtime, his church members were told he’d travelled abroad to rest not knowing he had been taken to his hometown.

This was the reason for his absence at the church’s anniversary on the 18th of July, 2013.

During the church service yesterday, most of his church members didn’t believe he has died with many calling his death a hoax.

Most of them argued that he could not have died, insisting that he travelled abroad to rest due to his hectic schedules.

According to reliable sources, some of his church members were hostile to news men who visited the church to confirm this report..

Late Prophet Ajanaku’s corpse was taken to a local mortuary around 11am this morning.

A member of the congregation was seen directing another member to arrange for security personnel  to accompany the corpse to the mortuary.

Church members who trooped to the home of the man they called ‘Daddy’, were directed to report at the church at Baruwa while the top leaders of the church were planning to take the corpse to the mortuary.

The two split over sex allegations few weeks before his death.

Tope Alabi  who is currently in Toronto, Ontario Canada was one of the earliest callers at the residence of the deceased on Sunday.

In another development, a neigbhour to late Prophet Ajanaku said his followers believe he’ll come back to life.

As a result, several prayer sessions have been held since he died.

“He died since Saturday, but the church members have decided to keep sealed lips.Instead, they have engaged in marathon prayer sessions. They held a vigil on Saturday where they prayed fervently for him to resurrect, but nothing happened.

Unknown to the public, Late Prophet Ajanaku was arrested and detained few months ago by security officials after an embarrassing public fight with Tope Alabi.

Weeks after his arrest, he reportedly fell ill and the rest is history.

Tope Alabi’s husband responded to the allegation thus: “this trouble started when we stopped attending Prophet Ajanaku’s church because he was beginning to see himself as a god in our lives.

“All he has said to the media are bunch of lies, just to look for a way to bring us down. I know there is a God in heaven who will judge everything we do on earth and reward all of us accordingly.

“I intentionally told my wife not to say anything and leave God to judge everything but I am using this medium to tell everyone out there that Tope Alabi never asked Prophet Ajanaku to sleep with her.”

Late Prophet Ajanaku was a muslim man with a solid Islamic background. He converted to Christianity on arriving Lagos few years back.

According to his profile, the late preacher tagged Bad boy for satan was denied access to basic education. He didn’t attend primary, secondary or university.

“Illiteracy was a big title for him because of his chronic state. He understood and could communicate in Yoruba language only.” He later attended the Winners Church Bible school

He is survived by a wife, aged mother and children (a boy and a girl).