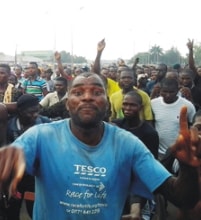 A 35-year old woman was allegedly beaten to death by a couple over scuffle she had with their children in Okpo village, Ekwulobia, in Aguata local government area of Anambra State.

The deceased, identified as Uju, said to be related to the couple, Mr and Mrs Okafor, reportedly gave up the ghost following series of flogging by the suspects.

The Nation gathered that the children of the suspects were playing football within their compound in the evening of the day of the incident when their ball suddenly fell into the deceased’s pot of soup, which she seized.

“Okafor’s children rushed immediately and reported the matter to their mother who did not take it lightly, as she hurriedly went over to Uju’s apartment and pounced on her,” one of the neighbors said.

The neighbor, who preferred anonymity added that while the fight ensued, her (Okafor) husband, who got wind of the incident, rushed to the scene and teamed with his wife to flog the deceased.

According to the source, the beating persisted until the deceased collapsed and lost consciousness, adding that she was later rushed to Dionye Memorial Hospital where she was confirmed dead by the doctor.

The chairman of the community, Chief Peter Odika, confirmed the incident, describing it as abomination.

He explained that the deceased was Mr Okafor’s second cousin, adding that the village would meet, while they wait for the police to conclude its investigations.

“The accused will be made to undergo certain cleansing rites in order to appease the gods of the land and to avert whatever curse such an abominable act could attract,” he added.

When our correspondent visited the town, some angry women from the village were seen protesting against the act, chanting “it is an abomination, an abomination has occurred.”

Efforts to get the reaction of the state police spokesperson, Mohammed Haruna, was unsuccessful, but a police officer who preferred anonymity, said the suspects were presently cooling in Ekwulobia Police station.