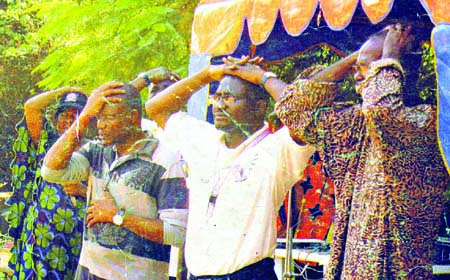 Curses enveloped Okpuno-Etiti, Oba community in Idemili South Local Government Area of Anambra State as late Mrs. Nkechi Juliet Onyejegbu, who was murdered in November, 2016 by people suspected to be members of her mother’s maternal relations inside her compound at Oba, was buried.

The late Onyejegbu was hacked to death by her assailants with machete.

Before her death, she was the wife of Col. Godfrey Onyejegbu, a retired military officer attached to United States’ Army, as well as the Director of Women Affairs at the Idemili South Local Government Area chapter of Governor Willie Obiano Support Group (WOSG).

Tears flowed freely as her remains were lowered into the grave about 1 p.m. in her husband’s compound, Oba, shortly after a funeral church service by officiating ministers from the Pentecostal Truth Mission (PTM), Nnewi and the Great Army Intercessors Ministry.

In his sermon, Evangelist Charles Obiagbaoso of the PTM declared that the wrath of God would surely visit her killers, unless they confess their sins and repent.

In a brief chat with journalists, her bereaved husband, Godfrey, said he was appalled that after all his petitions to both the state government and the police authorities both in the state and Abuja, no tangible thing had been done to fish out all the culprits, except one person who is now in detention.

Continue Reading
You may also like...
Related Topics:mother, murder, woman